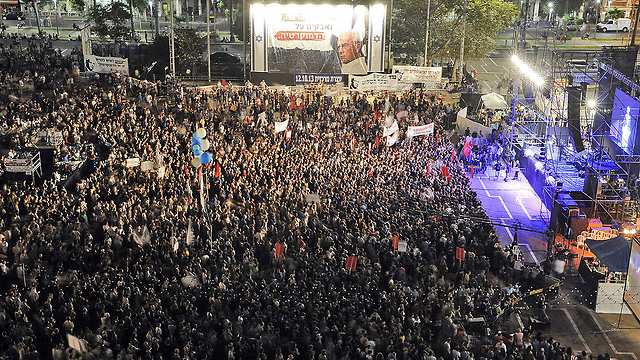 Rabin memorial: A dialogue rather than finger-pointing

Op-ed: A memorial day can’t be institutionalized for long if all people want is to feel that they are ‘right’ once a year. The main lesson from Rabin’s murder is to know how to argue and to remember the damaging potential of not knowing how to do that.

I was shaken by Prime Minister Yitzhak Rabin's murder. Twenty-two years later, I don't need anyone’s approval on that.

I was a young soldier at the time, and most of my fellow troops came from the Labor Settlements Movement. The political debate was part of what we did during our free time. Those who grew up in settlements, like me, carried the representation of a certain group in the State of Israel—Religious Zionism—on their head and shoulders.

Rabin Square memorial in 2013. Those who only want to point fingers aren't dealing with a memorial day, but with an imaginary righteousness day (Photo: AFP)

When someone from that group went out and murdered a Jewish prime minister, it called for serious self-examination. Such national traumas could lead to a war between brothers, to destruction in our home. A lot of luck and leadership prevented that from happening. Apart from the right-wing conspiracy lunatics, most people examined themselves. So did I.

I had participated in protests against the Oslo Agreements. I had heard scathing words against it, I had met violent people, and I never thought such a murder could take place, that a Jew would murder a Jewish prime minister.

The fact that we survived it is a badge of honor for Israeli democracy. Not every trauma can be overcome. The fact that we have been unsuccessful in deciding on a reasonable commemoration is an ongoing failure.

An annual memorial event organized by members of Commanders for Israel’s Security and the Darkenu ("Our Way") organization will be held Saturday evening. Both groups are located in the political Left. Two states for two people. It’s their full right. They are investing about NIS 1 million (roughly $280,000) in the rally. It would have been better if right-wing organizations had taken part in the organization too, but that didn’t happen.

In order to give the rally an apolitical touch, they invited all kinds of people to speak. They sent buses to the north, to the south and to Judea and Samaria. In the end, they even published ads calling for commemoration and stating that "we are one people."

The Left began slamming the rally shortly afterwards. The first claim was that they were flattering the Right, then that they had omitted the word "murder" from their ads (that was later rectified), and finally, that the desire to put political differences aside was a cover-up of the murder.

These claims join a High Court petition filed by playwrights Yoshua Sobol and Ephraim Sidon and an NGO called Secular Forum against a curriculum called "Israeli-Jewish Culture", which they say is teaching about Rabin’s murder without mentioning that the assassin was a religious rightist or the incitement that preceded the murder.

In both cases, this isn't an argument over historical facts, but over the accusing finger—the feeling of a certain group in the Left that the murder allegedly serves as proof of the rightness of its way. As if the moral failure of a right-wing religious murderer and of those who supported him, or even sinned by disregarding the incitement (or failing to pay attention), can serve as explanation for the Left's political failure in the elections.

Rabin’s murder was and still is one of the most significant events in my personal life and in the life of the Hebrew nation. The murder is a bright warning sign, a turning point, which is why it’s so important too. The murder isn’t proof of any ideological rightness, even if the ones guilty of the murder can be found in the Right.

We can argue about what Rabin would have done had he stayed alive and how Yasser Arafat would have responded. I’m one of those who think that terror would have erupted in any event. A cat is a cat, and Arafat was an unchanged terrorist. The handshakes with Rabin, and then with Benjamin Netanyahu and Ehud Barak, failed to move him from that place.

The historical processes should be taught in schools, in youth movements and through the media, but they’re not the only thing: It’s unthinkable that every curriculum dealing “only” with Judaism's attitude towards murder will be rejected because it fails to mention the religious right and the incitement in a sufficient manner. It's unthinkable that every rally whose participants don’t stand and blame the instigators from 20 something years ago and discuss exactly what was written on the coffin (and who understood or didn’t understand what was going on) is a "sycophantic rally."

A memorial day can't be institutionalized for long if all people want is to feel that they are "right" once a year. It’s okay to be alarmed by what happened then, and to be alarmed at the same time by a further reliance on Arafat and his twins.

The main lesson from Rabin's murder is to know how to argue and to remember the damage potential of not knowing how to do that. Those who only want to point fingers aren't dealing with a memorial day, but with an imaginary righteousness day.