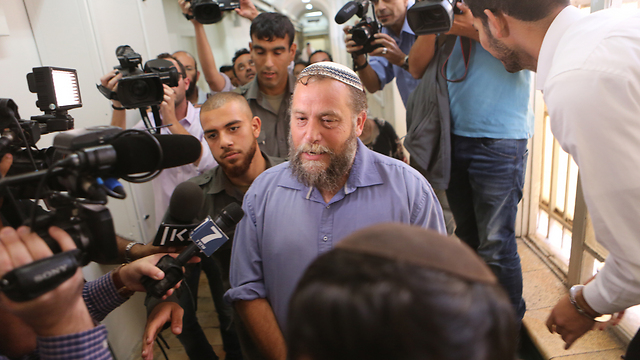 Benzi Gopstein to be indicted for incitement pending hearing

The Jerusalem District Attorney's Office notified Monday, after approval from the attorney general and state attorney, that Lehava leader Benzi Gopstein may face charges of incitement to violence, racism and terrorism, pending a hearing. Gopstein is also suspected of obstruction of justice.

Gopstein is suspected of making media statements over the past five years constituting a call inciting violence and published texts inciting to racism and support for the massacre committed by Jewish terrorist Baruch Goldstein at the Cave of the Patriarchs in 1994.

Lehava leader Gopstein may be indicted for inciting violence, racism and terrorism (Photo: Alex Kolomosiky)
In one of the instances described by the letter of suspicions Gopstein is said to have taken a microphone while attending a wedding in Modi'in Illit recently and sang a song glorifying Goldstein's actions. The song purportedly said, "Baruch the man, entered the cave, drew his weapon and fired." Shortly thereafter, Gopstein is said to have uttered the phrase, "Muhammad is dead, Muhammad is dead." In another instance a video was published showing Gopstein speaking at a memorial for the late Rabbi Meir Kahane. "The enemies within are a cancer and if we don't rid ourselves of that cancer, we won't be able to carry on existing and Jews will die daily." "The cancer's epicenter and zenith is at the head, and the head is on the Temple Mount. The Temple Mount is the biggest cancerous tumor we have, and so long as the Israeli government doesn't come to its senses and excises that tumor from the Temple Mount we won't be able to achieve full salvation for our country," Gopstein is said to have added.

Speaking in another interview, Gopstein said, "The first condition whenever I'm invited to a wedding is for no Palestinians to be present. No Arabs either. We seek only unadulterated Hebrew labor. Let's say if an Arab waiter were here he wouldn't be serving food."

Gopstein during one of his previous arrests (Photo: AFP)
When asked what he would have done, Gopstein said, "He would be looking for the nearest hospital." In a different incident Gopstein was asked by the media about violence perpetrated against Arabs as part of the struggle against assimilation. "I'm not a pacifist. Some people deserve to have violence visited upon them. An Arab hitting on a Jewish woman shouldn't be allowed to parade in the street with his Jewess," he replied.

Gopstein: 'Fighting for Jewish girls is not racism'

Gopstein's attorney Ben-Gvir said he believes that if indicted, his client will be acquitted (Photo: EPA)

Gopstein's attorney Itamar Ben-Gvir added, "I expect that similarly to the countless acquittals in other cases, my client will once again be acquitted should the state attorney's office decide to indict him. We have dozens of examples of Arabs and left-wingers making statements far graver than Gopstein's, but the attorney's office always closed their cases."

"It's also regrettable I learned of the hearing from the media and was not properly informed. Once again, the state attorney's office proves it conducts itself in a populist, media-centric fashion and is pressured by Reform organizations," Ben-Gvir complained.