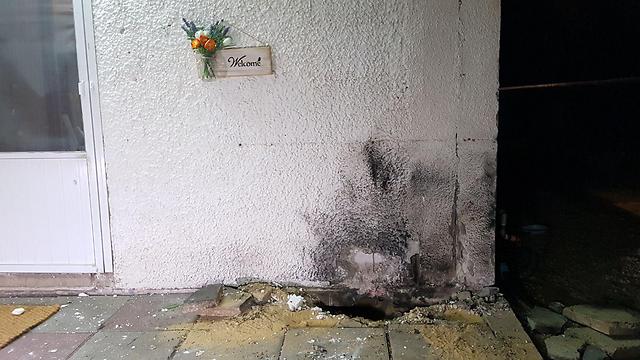 Strike back at Gaza with force

Op-ed: An Israeli living in a Gaza vicinity town appeals to PM Netanyahu to do his duty in defending the communities near the border from the almost daily rocket barrage from the strip, pleading 'don't let the trickles become a downpour.'

I'm aware that at the end of the day, I'm just a citizen. Just another citizen in one of the Israeli towns around the Gaza Strip.

And there it it again, that familiar sound of a Code Red alarm, a landing—and then the calm before the next storm. Luck did not fail to once again make an appearance, coming just when I needed it.

True, we're a tight-knit community and our moshav does not have a single home available to rent. True, we know the drill by now and it's just one more landing added to the list. But we mustn't lose sight of what's important, and we certainly can't consent to one more "trickle" after another. We've been there before, and we don't want to go back.

I'm not writing to offer my unsolicited advice to the government, and certainly not to the IDF. After all, who am I? Just another resident in one of the towns near the border fence. But just like every other Israeli living in the Gaza vicinity, I demand that any rocket landing on our side would incur a harsh, crushing response on the other side.

We cannot restrain ourselves in thinking it will all be alright or retaliate by bombing just a meaningless golden sand dune.

Since Operation Protective Edge, enemy outposts have sprung up beyond the fence like mushrooms after the rain. We've come to accept that too because you convinced us it was okay, that it was under control, that it was aboveground while we control everything below and that's it's only a matter of time until we know all their locations. And you convinced us the Iron Dome system is guarding us.

Gaza rocket launches at Israel are inching towards becoming an everyday reality again
But all those small trickles, which wake up "only" several thousand people, which don't come near the central region, which in years past have gone on for many months—those we cannot accept!

It's been in the air for a week now, and in light of past experience—quite a rich one, at that, unfortunately—we demand to strike back here and now!

Don't let the trickles become a downpour. Stop letting good fortune let you off the hook in the nick of time and thinking tomorrow it will all be alright, because those on the other side don't have a vested interest in commencing another round of hostilities.

A decision needs to be made that we'll hit back with force, come what may! Guard the Gaza vicinity! Make a decision, and stand by it as a state should stand by its citizenry. But I know, Mr. Prime Minister, that at the end of the day, I'm just a citizen. Just another citizen in one of the Israeli towns around the Gaza Strip.