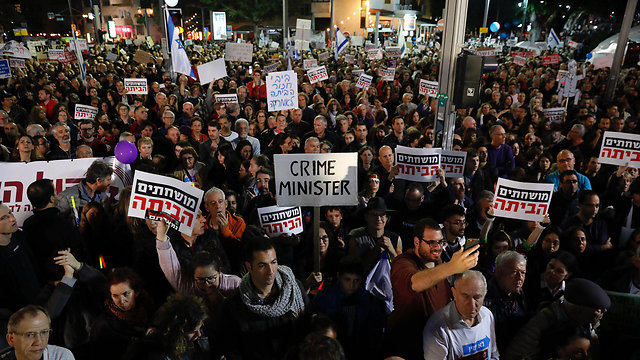 War on corruption must not be left to the Left

Op-ed: Yoaz Hendel calls on fellow right-wing people, settlers, rabbis, pre-military academy students—and even government ministers and the prime minister himself—to join him at Jerusalem’s Zion Square this Saturday evening for a protest in favor of the rule of law in Israel.

This Saturday evening, I’m going to protest. Not in Tel Aviv, but in Jerusalem. Not “against” but “in favor.” In favor of the rule of law, in favor of the checks and balances in the State of Israel. In favor of the war on corruption, wherever it may be.

I admit that the Rothchild Boulevard protests pushed me into a corner. I found it easy to oppose the messages from the Petah Tikva protests. I trust the attorney general and his system to do their job according to the evidence, regardless of the results. The attack on AG Avichai Mandelblit was anarchistic and conspiratorial.

Anti-corruption protest at Tel Aviv's Rothschild Boulevard. The general atmosphere prevents me from being there (Photo: EPA)
I have also trusted Police Commissioner Roni Alsheikh from the very first day he was appointed by Prime Minister Benjamin Netanyahu and Public Security Minister Gilad Erdan. I wrote in his favor when he was attacked by the Left, and I trust him even now when the conspiracies are coming from the Right.

Rabbi Yuval Cherlow’s participation in last Saturday’s protest got me thinking about what I was doing. It must be the power of one rabbi. I have a mental issue with the Rothschild protests. It’s not because of the anti-occupation signs or the pro-BDS sign. I know tens of thousands of people can’t be stained over a few radicals. That’s as wrong as staining the entire right-wing over marginal provocations in protests. It’s not even because of the harsh calls to jail a prime minister or Eldad Yaniv’s delusional statement that Netanyahu would go to war to evade the investigations and their results.

(Photo: Motti Kimchi)
So my protest Saturday evening will be in favor of the State of Israel and in favor of settling in it, in favor of the IDF and its senior commanders, in favor of the police, the investigation teams and the commissioner, in favor of the State Attorney’s Office and the legal system. In favor of the limitations of power and in favor of statehood, which the state can’t exist without. In favor of modest behavior and in favor of the faith that the leadership—in the Knesset or in the government—must be a role model. And no, we’re not receiving what we should be receiving. On regular days, I criticize everyone: Judicial activism, the police’s helplessness in dealing with agricultural crimes and the foot-dragging in the courts. These are not regular days. My criticism will continue, but it has nothing to do with the existential need for a repair. The national camp must now raise a moral voice. The war on corruption must not be left to the “opposition” people, to the “anti-occupation” protestors or to those who hope for a left-wing rule. That’s an ethical mistake, and not just because of the benefit considerations and the loss of Knesset seats—but, first and foremost, because we must look in the mirror. I hope I won’t be alone there at Jerusalem’s Zion Square. Israel Harel, who founded the Institute for Zionist Strategies, has agreed to take part. I hope to see settlers who care about incorruptibility, students of pre-military academies who still believe in the people of Israel’s ideals, members of the Beitar movement, rabbis who teach the doctrine of life and hold the book of morals. Not just tribal politics. Right-wing people, traditional and ultra-Orthodox. I hope the ministers and the prime minister come too. There’s no reason they shouldn’t come. If indeed “there is nothing,” supporting our state’s law enforcement systems is its leaders’ job, not mine.

And finally, forget about conspiracies and interests: I didn’t get these values in the media, I got them at my parents’ home in Elkana, in Bnei Akiva and in my military service. If you don’t like it, try to appeal to the younger generation. If the people I’m calling on arrive, I’ll be glad. And if not, I’ll stand there on my own with a sign and know that I did the right thing.