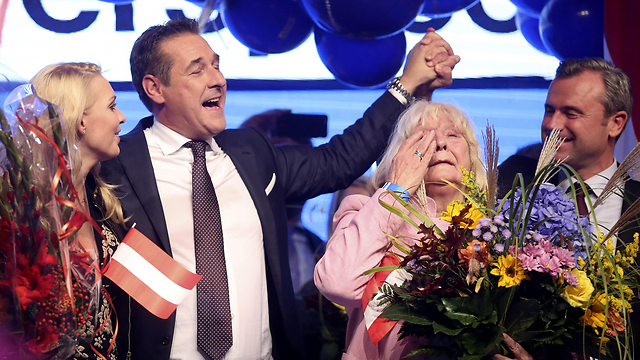 The freedom to hate

Op-ed: The open, blatant anti-Semitism in Austria may have gone underground, but many Austrians today don’t feel compelled to pretend they don’t hate Jews; it’s no wonder a party with Nazi roots has entered the government.

A radical right-wing party, with Nazi roots, in the Austrian government? What else is new?

This isn’t the first time that the nationalistic Freedom Party (FPÖ)—which was founded in 1956, and which was led from 1986 till his death in late 1999 by Jörg Haider, the son of a fanatic Nazi who was one of Adolf Hitler’s supporters and friends, and a Nazi himself—is part of the government in Austria.

The first time was in 1999, when the party won a major achievement in the elections, and then-Chancellor Wolfgang Schüssel was forced to invite it into his government to form a coalition.

Those days, I attended a ceremony for new Austrian army recruits at the site of the Mauthausen concentration and extermination camp, which was built by the Germans and Austrians in the 1930s. The new defense minister, one of the representatives of Haider’s party in the government, sought to emphasize through that ceremony that neither his party nor Austria itself remained anti-Semitic. I was the only Israeli invited to the ceremony, and I knew the reason of course.

It’s true that Heinz-Christian Strache, who has been leading the party since 2004 (Haider left to start another, more radical party, which wasn’t very successful, and was killed shortly afterwards in a road accident, which many in Austria believe was no accident but rather an assassination), has been trying to convince the world that it is no longer a fanatic or anti-Semitic party, and has even visited Yad Vashem in Israel. But all of Strache’s efforts, as well as his pro-Israel statements, can’t conceal the fact that the new foreign minister on behalf of his party, Karin Kneissl, compared Zionism to Nazism in the past.

In Austria, it seems, that doesn’t count as a reason not to give Kneissl one of the most senior positions in the new government. This beautiful country in the heart of Europe, after all, has a clear history of hating Jews. Despite the Jews’ huge contribution to the Austrian art, culture and economy in the beginning of the 20th century, the German Führer’s people (Hitler was born and raised in the Austrian town of Braunau) voted almost unanimously in a 1938 referendum in favor of the annexation (Anschluss) of Austria into Germany. We all know what happened next.

After the war, the Austrians managed to convince the Allies that they had been victims of the Germans and won benefits granted to “victims” (Austrian-American Jewish filmmaker Billy Wilder, by the way, wrote in his autobiography that the Austrians’ biggest achievement was “making the world believe that Hitler was a German and Beethoven an Austrian”). In 1970, possibly as part of their rehabilitation attempt, the Austrians elected a Jew—Bruno Kreisky—as chancellor.

All that, however, doesn’t clear them of anti-Semitism and Xenophobia. To this very day, for example, most Austrians are against taking in foreigners or refugees. Xenophobia is the main factor that won the nationalistic Freedom Party 26 percent of the votes in the recent elections. The open, blatant anti-Semitism may have gone underground, but many Austrians today don’t feel compelled to pretend they don’t hate Jews.