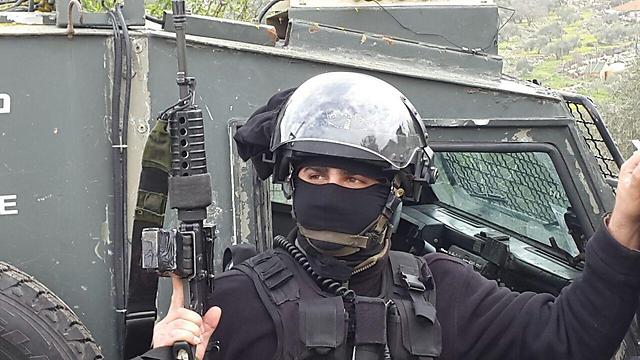 Major N. is a Christian Border Policeman from northern Israel who stopped 3 separate terrorist attacks at Tapuach Junction since 2014; 'I am always in a high state of alert. After each incident, I speak with my wife, and she says to do whatever makes you happy. I do not want to leave this spot.'

Major N. is becoming a serial hero. The Border Policeman stopped a terrorist attack for the third time, all at the very same junction of previous attacks he had thwarted, when he shot two terrorists Tuesday who sought to stab Israelis at the Tapuach Junction in the northern West Bank.

N., married with a child, is a Christian from the northern region who volunteered and joined the force ten years ago. When a soldier in the guard tower radioed him that suspicious youths were approaching the junction, N., the commander on duty, together with another soldier advanced and called on them in Arabic to stop.

But their calls went unheeded and upon noticing a metallic object peeking out of one of their sleeves, N. fired into the air prompting, one of the youths to dash forward, knife drawn. N. then shot them both from a distance of about 15 meters.

In April, 2014, N. was the soldier who shot and felled a terrorist who stabbed to death Evyatar Borovsky, a resident of the Yitzhar settlement, at the Tapuacah Juction. The terrorist grabbed Evyatar's weapon and tried to shoot N., who took cover and returned fire, neutralizing the threat.

About a year ago, a terrorist from the Ramallah region tried to commit a stabbing attack at the same junction but was stopped by N. and his fellow Border Policemen.

"I worry, and the more incidents I am involved in, my concern increases," N. admitted. "I am always in a high state of alert. After every incident, I speak with my wife, and she supports me. When I said I wished to remain at the junction she said, 'Do whatever makes you happy.' I do not want to leave this spot."

He continued: "This is a place where an incident can happen at any second, and therefore, immediately after an attempted attack ends, we re-enter a state of readiness for the next one."