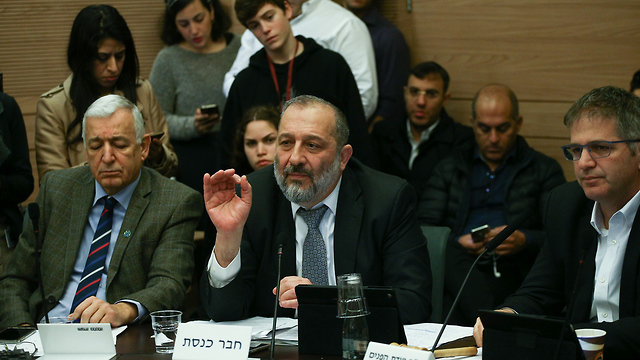 Despite stringent denials from both Rwanda and Uganda, Interior Minister Deri maintains that an agreement was reached with an unspecified third country to deport African migrants to its territory; families, children and those who submitted asylum requests by end of last year will not be deported, he adds.

The Knesset's Internal Affairs and Environmental Protection Committee hastily convened Monday to discuss the public outcry against the plan to deport Eritrean and Sudanese asylum seekers to Rwanda, with the minister tasked with carrying out the plan, Interior Minister Aryeh Deri, in attendance.

Despite previous blanket denials from the Ugandan and Rwandan governments, Interior Minister Deri insisted in the committee's hearing that there was "unequivocal assent with a third country over forced expulsion." Anyone who submitted requests for asylum by December 31, 2017, and his request has not yet been processed, will not be deported, Deri claimed. The same went for mothers, children and families.

Deri asserted that an agreement was in place with a third country to receive African migrants (Photo: Ohad Zwigenberg)
"We're completely demarcating between refugees and work migrants. We're locating a group that came from a warzone, which we will treat as refugees, despite the fact they can be returned to a third country," Deri said. "Most of the young (migrants) who are not parents never even submitted requests for asylum, and we have begun deporting them to a third country, with that country's consent," the minister claimed. "Locating and expelling them is a difficult operation to carry out," Deri continued. "Since 2007, some 72,000 people entered Israel, and today they number 37,800, not including the children born every year whose number we estimate to be 6,000." "In 2017, more than 3,000 migrants willingly left to a third country or to their country of origin. We also forcefully expelled 5,300 non-African migrants, from the Ukraine, Georgia and other countries," Deri concluded.

Replying to accusations that the migrants' requests for asylum were not properly processed, Deri replied, "A total of 14,700 requests were submitted in 2017—7,700 from Ukrainians, 906 from Sudanese and the rest from other countries."

African migrants previously protested their impending expulsion (Photo: AFP)
Deri further maintained that the majority of requests were submitted by citizens of countries belonging to the former Soviet Union, and not Africans. He said, "We found acquaintances picked them up from the airport and dropped them off in Salama (in south Tel Aviv—ed).

"We haven't been getting requests for asylum from the Ukraine and Georgia for months now, because we blocked them. We've foiled these requests in two or three days, and a large PR campaign is going on in their countries informing them they shouldn't come here."

Responding to Deri, MK Michal Rozin said, "The Rwandan government is making the Israeli government look like liars. Why don't you disclose the agreement and its terms? It's inconceivable for it to be kept hidden from the public and for us to have to take your word for them lying and you telling the truth. Forced expulsion will be a black mark on the annals of Israel's history."

MK Dov Khenin added, "The undisclosed agreement with a third country is secretive for a reason—there is much to hide. The most significant thing to hide is that (the migrants) are expected to face the gravest of dangers, and we know that not in theory but from testimony. Look at these people, they're not a demographic danger."

MK Zandberg said the Likud party was 'friends with Nazis' as she was being removed from the hall (Photo: Ohad Zwigenberg)
During the tumultuous debate, MK Kish temporarily ejected MKs Stav Shaffir, Merav Michaeli, Oren Hazan, Michal Rozin, Issawi Frej and Tamar Zandberg from the committee's hall. As she was being forcefully removed, Meretz MK Zandberg called out "You're friends with Nazis", raising the ire of Likud parliamentarians Kish and Amir Ohana. Zandberg clarified his utterance when the hearing concluded, saying, "Kish's demagogy has crossed all red lines. I stand by my assertion that the ruling party's ties to anti-Semitic and Nazi parties in Europe are a disgrace to the State of Israel and to its government."

(Photo: Ohad Zwigenberg)
"This government cannot be allowed to utilize Holocaust demagogy when it's convenient while simultaneously signing off retroactively on the Rwandan genocide, hold ties with Polish Holocaust deniers and host anti-Semites from Austria," she added. Opening the debate, Kisch said, "A campaign attempting to assist infiltrators has picked up steam recently. It's time to shatter these blunt lies. I denounce the phenomenon of denigrating the Holocaust. We'll allow refugees to remain and send work migrants back. Jewish morality instructs to deport infiltrators."

Committee Chairman Kish said refugees will be allowed to remain, while work migrants will be sent back (Photo: Gil Yohanan)
A proposal submitted by opposition MKs Eyal Ben Reuven (Zionist Union), Michal Rozin (Meretz) and Aida Touma-Suleiman (Joint List) regarding the state authorities' handling of African asylum seekers said that it was recently published that the state had no "viable possibility of forcefully expelling asylum seekers, an option the prime minister had instructed to be examined. Sources with knowledge of the situation noted that the chances of putting people on airplanes against their will were slim to none.

"In addition, such a move will necessitate complex logistics, the assent of numerous entities, significant financial expenditure and recruitment or training of a vast workforce. Not only that, but Rwanda—considered the third country Israel intended to expel migrants to—did not agree to receiving migrants expelled against their will."

The MKs then added that Israel had 34,888 Sudanese and Eritrean asylum seekers living within its confines. Up to 2013, they noted, the country did not even allow Africans to submit requests for asylum. Furthermore, once it consented to such a process, it was conducted with interminable inefficiency, with only a single bureau in the entire country processing requests. "Of the 15,000 requests submitted, only ten people were afforded the status of refugees. Israel has the lowest recognition rates in the Western world," the opposition members claimed. "As of today, 8,588 requests by Eritrean and Sudanese nationals are pending response, some of them for more than three years." In conclusion, the three wrote that, "Should the state decide to carry out the expulsion of asylum seekers against their will, it should ascertain who is a refugee and who isn't, and it can only do that by professionally and thoroughly vetting the asylum requests."