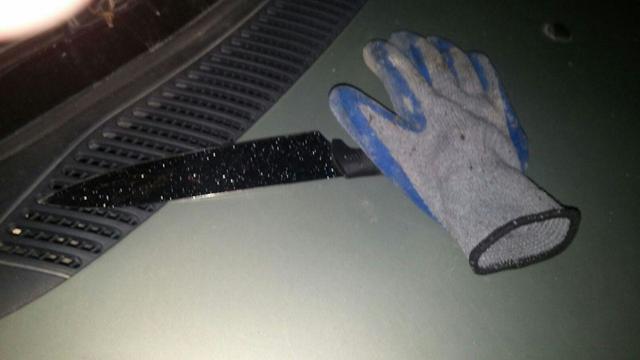 Terrorist, identified as 17-year-old Hamza Zamareh from Halhul, arrives at security post in Gush Etzion settlement early in the morning and attacks one of the guards; guard fights off attacker, gets stabbed in the hand; another guard shoots terrorist dead.

A security guard was very lightly wounded Wednesday morning in a stabbing attack in the settlement of Karmei Tzur in Gush Etzion.

The terrorist arrived at the settlement by car early Wednesday, opened the door of the security post, and attacked one of the guards in his hand.

Another security guard opened fire and killed the terrorist, who was identified by Palestinian security sources as Hamza Zamareh, 17, from Halhul, which is not far from the scene of the attack.

Knife used by the terrorist

IDF forces that arrived at the scene launched a search for possible accomplices.

Palestinians said Israeli troops arrived at the Zamareh family home shortly after the attack and began interrogating relatives, while Palestinians hurled stones at the soldiers. One of the rioters was arrested.

The wounded guard, Boris Balbrava, 36, from Karmei Tzur, was taken to the Hadassah Medical Center in Jerusalem's Ein Karem for treatment.

"The security guard got to us after having tried to fight off the terrorist in close hand-to-hand combat," said Prof. Mosheiff Ram, the head of the Orthopedic Trauma Center at Hadassah."The terrorist stab him in his palm... I'm optimistic about the palm, but we're looking into it."

Tensions have risen in the West Bank since US President Donald Trump's December 6 recognition of Jerusalem as Israel's capital. His declaration overturned decades of US policy that its status should be decided in Israeli-Palestinian negotiations.

In the West Bank city of Nablus, Palestinian officials say two Palestinians were killed and dozens more wounded in clashes overnight with Israeli soldiers conducting searches for Abed al-Karim Adel Assi, the terrorist who fatally stabbed  Rabbi Itamar Ben-Gal at the entrance to Ariel on Monday.

"During the activity, a violent riot was instigated as approximately 500 Palestinians hurled rocks, fire bombs and explosive devices and fired live rounds at IDF soldiers, and in addition the rioters built rock barriers," the IDF said.

The troops responded with riot dispersal means and fired warning shots in the air.

The Palestinian Health Ministry put the number of Palestinians wounded at 29.

Adel Assi was not apprehended in the operation, but seven people were detained for questioning.

Rotem Elizera, AFP and Reuters contributed to this report.