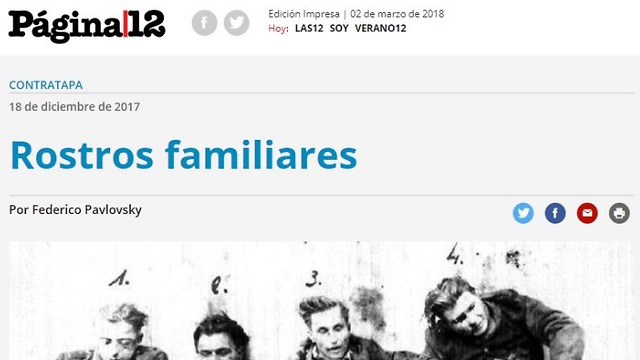 The first suit has been filed Friday under the Polish Holocaust Law, which went into force just a day earlier, against an Argentinean newspaper that used the photo of anti-communist Polish resistance fighters, taken after World War Two, in an article dealing with a 1941 massacre of Jews in the Polish town of Jedwabne. The suit, pressed by a group called the "Polish League against Defamation", accused the Página/12 newspaper—one of Argentina's three biggest dailies—and the article's writer, Federico Pavlovsky, of "action intended to harm the Polish nation and defame Polish soldiers." The article dealt with the Jedwabne pogrom. For dozens of years after the war, Polish communist authorities attempted to cover up the role played by Poles in the massacre, choosing instead to point the finger at Nazi special units.

The December Página/12 article that led to a suit being pressed against both the paper and the writer
A report published by historian Jan Tomasz Gross in 2011, however, claimed that the Poles carried out the massacre themselves, in which some 1,600 Jews were killed. Interestingly, as first pointed out by the website Notes from Poland on Twitter, the article went up in mid-December, a month before the law was voted on in Polish parliament and a whopping three months before it went into force, bringing to light some questions regarding attempting to enforce it retroactively. Nevertheless, the contentious Polish Holocaust Law asserts that any utterances ascribing responsibility to Poland for crimes against humanity committed during the Holocaust will be considered a crime, punishable by up to three years in prison. While the law has already gone into force, Poland has made it clear it will not be enforced until talks with Israel conclude and a decision is reached in the country's constitutional court, which will then refer the law to President Andrzej Duda for reinspection. Last week, Poland's parliament postponed a session dealing with whether to dedicate a memorial day to Poles who saved Jewish lives during the Second World War. Those opposing the measure claimed the timing was inopportune, considering the controversy engendered by the Holocaust Law.