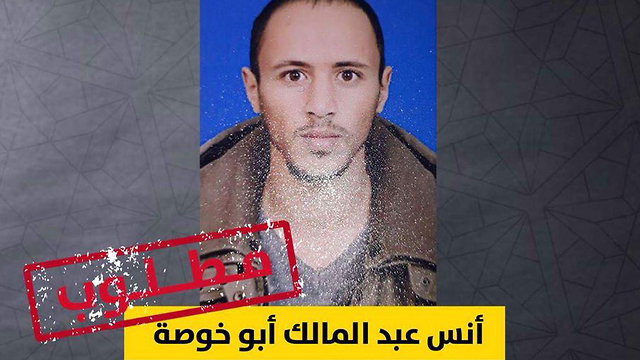 Hamas security forces circle home in Nuseirat refugee camp to capture Anas Abu Khoussa, alleged to have carried out the attempt on the life of Palestinian PM Hamdallah; would-be assassin, who may have had ties to Gaza Salafist movements, was badly wounded during siege, later dies; 2 Hamas operatives die during siege.

Hamas security forces were involved in a firefight in the Gaza Strip's Nuseirat refugee camp Thursday morning as part of the manhunt after Anas Abu Khoussa, suspected of the attempt on the life of Palestinian Prime Minister Rami Hamdallah. Forces have besieged a home within the camp in which Abu Khoussa has allegedly been hiding.

Two Hamas combatants were killed during the firefight, whereas Abu Khoussa was seriously wounded and later succumbed to his wounds in hospital. In addition, another man suspected of having been an accomplice was killed and a second alleged accomplice was captured.

Abu Khoussa, 26, was said to be the person suspected of the attempted assassination, and may be related to Gaza Salafist movements, according to Palestinian sources.

Earlier Thursday, roadblocks were put up and smuggling tunnels near Rafah were closed by the terror group ruling the isolated enclave to prevent and block Abu Khoussa from escaping the strip. Hamas also prevented access to the Erez border crossing Thursday morning, later allowing only humanitarian cases to pass.

The bombing of Prime Minister Rami Hamdallah's convoy in Gaza last week dealt another blow to efforts to implement a unity deal between the two main Palestinian factions—Islamist Hamas, which dominates Gaza, and Fatah, the main party in the Palestinian Authority in the West Bank.

Anas Abu Khoussa wanted poster. He was said to have been badly wounded and captured by Hamas forces in Gaza

The motorcade Hamdallah and Palestinian security chief Majid Faraj was attacked on March 13 shortly after it entered Gaza from neighboring Israel. They were uninjured.

Palestinian President Mahmoud Abbas had blamed Hamas for the explosion.

After Thursday's raid, a spokesman for Hamdallah's government questioned Hamas's version of events and again accused the group of bearing "full criminal responsibility" for the assassination attempt.

"Once more, Hamas is going along the same path of ... fabricating weak stories that make no sense," the spokesman, Youssef Al-Mahmoud, said.

Last week, Gaza's Hamas rulers shut the offices of a Qatari-Palestinian cellular provider in connection with its investigation into the explosion that targeted the visiting Palestinian prime minister.

Hamas police spokesman Ayman Batniji said Saturday that Wataniya Mobile, a subsidiary of Qatar's Ooredoo, was being closed down for "refusing to cooperate" in the inquiry. Ynet also revealed that several Wataniya and Jawwal employees were arrested in conjunction with the investigation due to their refusal to cooperate.