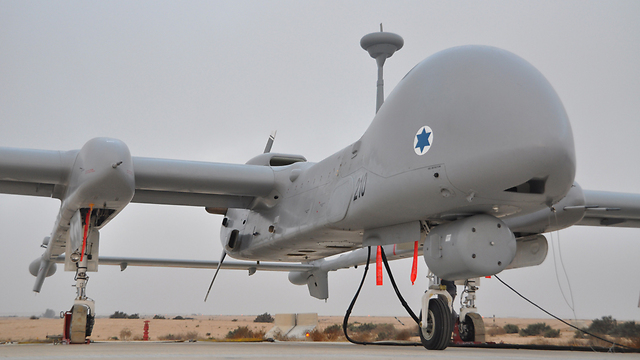 Germany closing in on deal to buy Israeli-made drone

Germany is close to finalizing a deal that will see the country buy its first weapons-capable drone aircraft—an Israeli designed model—from European aerospace giant Airbus, according to a government response to lawmakers.

The deal, worth nearly 900 million euros ($1,108.53 million) including training and maintenance costs, has been politically contentious because of fears that having combat drones might make Germany more likely to participate in offensive military action abroad.

"At the moment the aim is for parliament to consider (the deal) and for the subsequent signing of the contract to occur soon, before the current binding offer expires," Germany's defense ministry said in a written response to questions from the opposition Left party. The terms of the offer are binding until May 31, meaning parliament would have to approve the agreement in the coming weeks.

Heron TP drone (Photo: IDF Spokesperson's Unit)
The government's response, dated April 12 and obtained by The Associated Press late Friday, adds that the agreement foresees the deployment of drones to a theater of operations by about mid-2020. "We now have confirmation that parliament is expected to sign off on the purchase of weapons-capable drones, likely in mid-May," said Left party lawmaker Andrej Hunko said Saturday. "It's the starting point for Germany to get its own combat drones," he said. "We oppose this because combat drones loosen the constraints on warfare, they lower the threshold for military operations and they have nothing to do with national defense."

Defense Minister Ursula von der Leyen is keen for Germany to acquire the kind of combat drones already widely used by its allies, but the center-left Social Democratic Party blocked a deal in parliament in the run-up to last year's elections.

The drone in action

After agreeing to extend their governing coalition with Merkel's center-right Union bloc for another four years, however, the Social Democrats dropped their objections to buying the drones without armaments, but it's unclear whether they will support arming the aircraft, which would require a separate agreement.

The drones are a variant of the Heron TP made by Israel Aerospace Industries. They are used for reconnaissance missions but can also be equipped with a lethal payload such as US-made Hellfire missiles. German weekly Der Spiegel has reported that Berlin favors Israeli-made Jedi missiles, because the explosion caused by the warhead can be adjusted to minimize collateral damage.