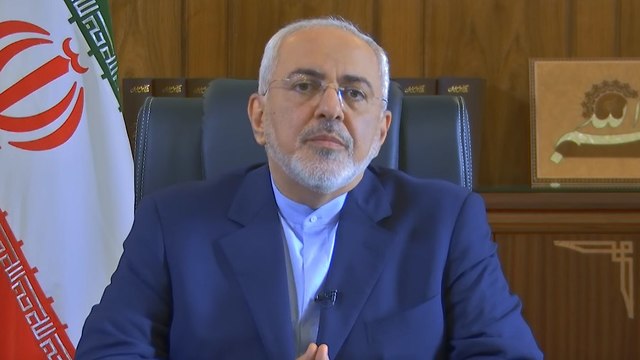 Mohammad Javad Zarif insists in YouTube message Iran has 'implemented deal in good faith'; in message to President Trump, a former real estate mogul, Zarif says 'When you buy a house ... you cannot come back two years later and try to renegotiate the price.'

Iran will not renegotiate the 2015 nuclear deal it signed with major powers, Iran's foreign minister said on Thursday, as a deadline set by US President Donald Trump for Europeans to "fix" the deal looms.

"Let me make it absolutely clear once and for all. We will neither outsource our security, nor we will renegotiate or add on to a deal we have already implemented in good faith," Mohammad Javad Zarif said in a message posted on YouTube.

Insisting that the UN nuclear watchdog had confirmed on eleven occasions that the Tehran had been in compliance with the terms of the deal, Zarif accused the United States of "consistently" violating it, "particularly by bullying others to preventing businesses to return to Iran."

Zarif's video, which was also posted to Trump's favorite social media platform, Twitter, appeared to be taking his message to the masses after earlier speaking to news outlets across the United States to defend the deal.

It comes as Trump has signaled he will withdraw from the agreement by May 12 if it is not renegotiated and changed. Those changes have included proposals to limit Iran's ballistic missile program, which Tehran says it has as a defensive deterrent.

In the video entitled “A message from Iran”, Zarif suggested that the European response to President Trump’s dissatisfaction with the agreement was akin to appeasement.

“This appeasement entails promises of a new deal, that would include matters we all decided to exclude at the outset of our negotiations, including Iran’s defensive capabilities and regional influence,” said Zrif, who on Monday appeared in Prime Minister Benjamin Netanyahu’s presentation on Iran’s secret atomic archive, which he said offered “conclusive proof” that “Iran brazenly lied” about its nuclear weapons program.

“The response from some Europeans has been to offer the United States more concessions, from our pocket,” Zarif vented.

“We have not attacked anyone in centuries,” he added, while blaming the US for backing former Iraqi leader Saddam Hussein in his attack on Iran.

In an apparent attempt to convey the message directly to President Trump, the former real estate mogul, Zarif said: “To put it in real estate terms: When you buy a house and move your family in, or demolish it to build a skyscraper, you cannot come back two years later and try to renegotiate the price.”

Concluding his speech, Zarif issued a stern warning to the US that Iran would respond s it sees fit if Washington continued to “violate” the deal.

“Iran stands firm in the face of futile attempts at bullying. But if the US continues to violate the agreement, or if it withdraws altogether, we will exercise our right to respond, in a manner of our choosing,” he warned, before vowing that “bluster or threats won’t get the US a new deal, particularly as it is not honoring the deal it has already made.

“Thus the US is well-advised to finally start honoring its commitments, or it and only it will have to accept responsibility for the consequences of not doing so,” he threatened.