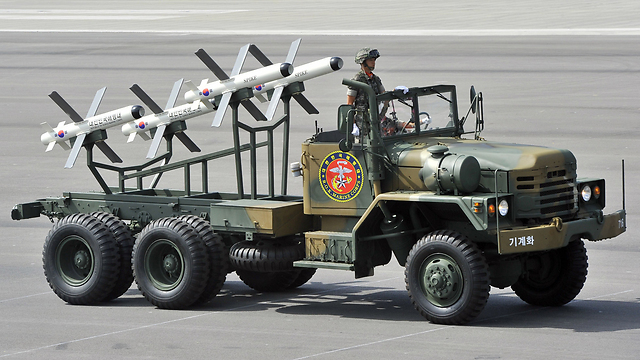 A major air defense deal with India propped up defense exports to $9.2 billion in 2017; 31% of sales were missiles and missile defense systems, drone sales down; Asia-Pacific nations lead buyers.

The Defense Exports Department of the Defense Ministry publicized the data for 2017's defense exports on Wednesday, showing that sales increased by 40% over 2016 and amounted to 9.2 billion dollars.

The ministry's report listed the following sales percentages: missile and aerial defense systems amounted to 31%, radar and aerial defense systems accounted for 17%, upgrades and avionics for 14%, ammunition and weapon stations for 9%, communications systems also for 9%, observation and optics for 8%, intelligence and cyber systems for 5%, services and miscellaneous for 3%, UAVs for 2% and marine systems and satellite and space for 1% each.

As for a geographic breakdown, 58% of exports headed to Asia-Pacific nations, 21% to Europe, 14% to North America, 5% to Africa and to 2% Latin America. A 2.5 billion dollar air defense system sale to India served as the lion’s share of the sales increase. Missiles and air defense systems saw the biggest increase in sales, while unmanned military drone sales decreased compared to previous years, owing to competition from China and the US.

Defense Minister Lieberman (Photo: TPS)
The Cypriot navy purchased coast guard cutters and four military patrol boats were sold to Argentina last year. A billion euro drone deal to Germany and a Gil Missile sale to India are planned for 2018. Defense Minister Avigdor Lieberman said, “Within two years we increased defense exports by dozens of percentage points. This is a huge accomplishment that was achieved through hard work by the industry and the ministry and through a series of contracts signed with countries that expressed faith in our ability and creativity.” “This achievement will allow us to increase the research and development budget, create more jobs and especially to increase the IDF’s superiority over the coming years,” he said. The defense industry employs 150,000 people directly or via contractors.