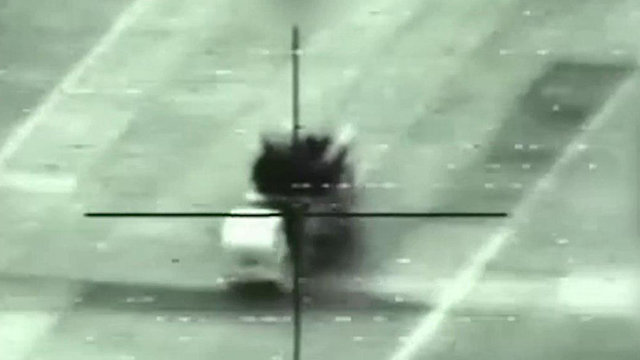 New footage and additional details from the Israeli Air Force (IAF)'s overnight strike in Syria, during which over 50 Iranian targets were bombed, emerged on Thursday evening.

New video released by the IDF Spokesperson's Office was taken via a missile targeting an S-22 Syrian aerial defense system, which tried to fire anti-aircraft missiles at IAF fighter jets.

Footage of IDF missiles bearing down on rocket launch pad

The attack, which the air force said was the most extensive strike in Syria since 1974, lasted an hour and a half.

Nevertheless, a senior IAF official sought to put the strike in perspective, saying that Iran's Quds Force still has the ability to fire rockets from Syria.

"The Iranians are motivated to bring their own anti-aircraft systems to Syria, and we'll know how to deal with that too," he said. "Every Syrian battery that threatens us will be attacked and won't get in our way."

"We assume the Iranians have long-range rockets, with a range of over 40 kilometers, and we're prepared for them as well," he added.

The senior officer noted that IAF's planes were able to operate successfully despite problematic weather conditions and what he referred to as "crowded skies" over Syria.

Israel informed Russia and the United States of the attack before it commenced, the IAF officer noted.

The strike in Syria overnight was coordinated with Russia and the US, an IAF officer said (Photo: Reuters)

The IAF was also able to implement the conclusions it drew from the February 10 incident in which an Israeli F-16 jet was downed by Syrian aerial defense.

"The Syrians fired dozens of missiles at us last night, of all kinds, including the SA5, and every battery that fired was destroyed," he said. "There's concern that if we destroyed their existing batteries, like the SA5, then later they'll get the S-300 system, which is more advanced, but we are sending a message that every battery that threatens our planes will be destroyed."

"We've warned the Syrians that we would continue operating against the Iranians in Syria, and we won't let the danger they pose become realized," he added.

The officer also confirmed that on Tuesday night, Israel obtained intelligence about a rocket launcher that was about to fire at Israel, but IAF planes were able to thwart the threat by bombing the launcher.

However, the rockets fired overnight Wednesday were not discovered in advance. "They remade their plans. We didn't identify the launcher last night before it fired. It's like finding a needle in a haystack. But it was attacked shortly after it fired," he said.

Wednesday night's retaliatory attack came in the wake of the launch of 20 rockets at Israel by the Iranian Revolutionary Guards' elite Quds Force. None of the rockets fell inside of Israel, and four of them were intercepted by the Iron Dome missile defense system.

The Syrian Observatory for Human Rights reported at least 28 dead in the Israeli attacks, while the Syrian army claimed only three fatalities.

Brig.-Gen. Amit Fisher, the commander of the 210th "Bashan" Division, which is in charge of the Golan Heights, said that, "We received a lot of aid from the Iron Dome. Thanks to an intelligence effort and good and advanced fire capabilities we were able to hit significant enemy forces that have been acting against us recently. We were able—at night, in several hours of fighting—to reach the significant achievements we wanted. We're prepared to identify any enemy coming into the area, coming close to the border, watching the border, or threatening it."

"We want a quiet border, like we've had for over 40 years. Enemy forces that come near the border and try to carry out attacks against us, we'll make sure to keep them away from the border by any means necessary," Fisher added.