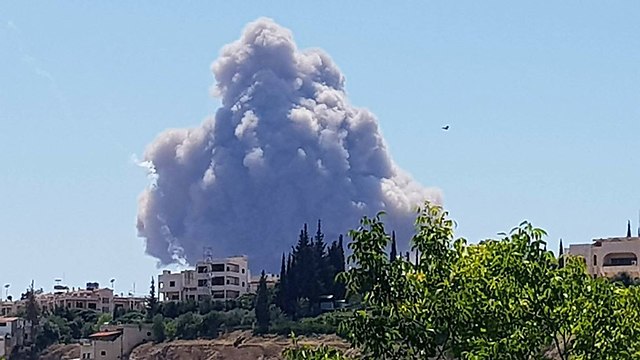 Explosions heard in and around airport in central Syria

Explosions were heard in and around Syria's Hama airport on Friday, Syrian state media said, without elaborating on the cause of the blasts, and a monitoring body said 11 pro-government troops were killed. The Syrian Observatory for Human Rights, a Britain-based war monitor, said the series of explosions happened inside Hama's military airport and had been heard in Hama city. Eleven people had died and dozens were missing from among Syrian government and allied forces.

Thick plumes of smoke seen above the airport
"Five blasts at least were heard inside Hama military airport ... targeting ammunition and fuel depots," the Observatory added.

The war monitor said it wasn't clear whether the blasts had been caused by technical failure inside the depots or an attack. Thick plumes of smoke could be seen above the airport, it said.

Sky News Arabia, however, reported the explosion was likely an Israeli attack on a stockpile of missiles used by the Bavar-373, the Iranian version of the Russian S-300 missile defense system.

Syrian citizens reported seeing an aerial attack, but Syrian official has yet to point the finger at Israel.

The Assad regime announced Thursday that it had reoccupied the region and declared it "free of rebels."

However, the president's forces are still fighting with several militias remaining in the region.

The Hama air base is used by government warplanes that carry out airstrikes on central and northern Syria.

Israeli aerial strikes on Iranian weapons stockpiles have increased recently, with the latest being one of the heaviest Israeli barrages in Syria since the conflict there began in 2011; 50 Iranian targets in the country were bombarded after 20 missiles were fired at Israeli military bases in the Golan Heights.