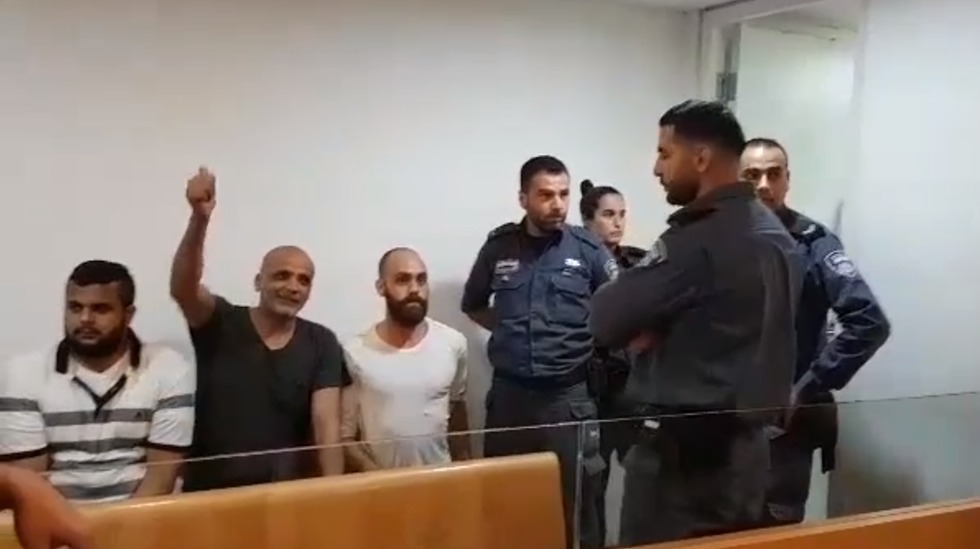 Police sought to extend remand of people arrested at Haifa protest against Israel's actions in Gaza by 5 more days, but court decides to release them, including director of human rights nonprofit who accused cop of intentionally breaking his leg; their release a 'slap in the face of police,' director Farah says; 7 other protesters required medical attention after arrest, court discovers.

The Haifa Magistrate's Court released Monday morning all 19 people detained in Haifa Friday after a protest decrying Israel's actions in the Gaza border riots, rejecting police's request to extend their remand by five days. In his ruling, the judge noted the large number of detainees who were injured, as seven of them required medical attention at hospitals. Judge Amir Salameh did, however, accede to police's request to delay by several hours the release of seven of the detainees, suspected of assaulting a police officer, so police could decide whether to appeal their release.

Nevertheless, Judge Salameh determined the incident was better categorized as disrupting an officer in the line of duty rather than assaulting an officer.

Protesters were released on bail and barred from attending any further demonstrations for 15 days.

Among those released were Jafar Farah—whose leg was broken after he was arrested—his son and his nephew.

Farah, director of the Mossawa Center that promotes the rights of Israel's Arab citizens, was arrested after at Friday's protest and alleged his leg was broken by a policeman after his detention.

Jafar Farah at Sunday's hearing, which he attended on crutches (Photo: Zohar Shachar)
He received treatment overnight at the northern city's Rambam Medical Center, where he was taken after his court date. He was examined by doctors, who changed the cast on his leg. The hospital later released a statement saying he required no further medical attention. After his release, Farah said the court's ruling was a "slap in the face of the police," adding, "It's time for the Israel Police to educate its cops to respect freedom of speech and not oppress people."

"This isn't Iran. If Israel wants to follow in Iran's footsteps, let it, but stop calling it a democracy. What happened here is a disgrace to any democratic country. It's inconceivable for people who went out protesting to be repressed like this, hurt physically, beaten and humiliated," he exclaimed.

At the outset of a Sunday evening hearing, Farah recounted the circumstances leading to his leg being broken.
Footage of the Haifa protest    (צלם: עודד גלעד)
X

Footage of the Haifa protest

"I came to the rally to look for my son and found myself arrested, and have been for 48 hours now," Farah said in court. "While I was in custody, one of the Haifa policemen saw fit to kick me in the leg and broke my knee." Police announced Sunday that despite the fact that 48 hours had elapsed since the incident, they had still not discovered what led to Farah's leg being broken. The nonprofit's director, who attended the hearing on crutches, was met with applause from his assembled supporters. His son, also detained at the protest, was also present, with his lawyer claiming he was beaten as well. Farah recounted the day's events for the judge, saying, "We landed in Israel Friday morning. I didn't have time or planned on participating in the protest, but I've brought up my children to be involved. My son arrived there after 9pm, after videos from the protest had already surfaced.

21 people were initially arrested in the wake of Friday's protest
"I went out looking for him because I realized things were not going as they should. I saw people from the police's Yasam (special patrol) unit surrounding the area. I tried leaving, but the Yasam policemen wouldn't let me. They lunged at (the protesters) and arrested my son and brother. I got near the squad car but was told to get the hell out of there." When Farah's part in the hearing concluded, he was taken back to the city's Bnei Zion Hospital. Public Security Minister Gilad Erdan iterated in a tweet his support of a Police Investigations Unit's probe into the matter, saying only "an impartial external body could ascertain" the facts of the case.