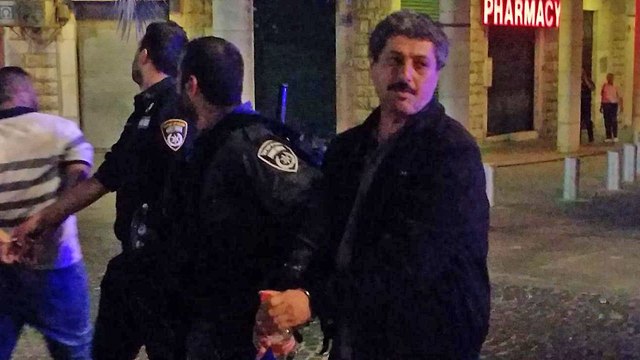 Police decided to put policeman suspected of assaulting Mossawa Advocacy Center Director Jafar Farah during Haifa demonstration on forced leave while investigation against him continues; Farah: 'I look forward to an apology.'

The police have decided to put an officer suspected of attacking the head of an Arab human rights organization on compulsory leave Monday. The officer is suspected of breaking the leg of Jafar Farah, director of the Mossawa Advocacy Center for Arab Citizens of Israel, during a Haifa protest surrounding events on the Gaza border.

The policeman was questioned several times by the Police Investigations Unit and was removed from his position for several days during the interrogation. A decision was then made to put him on compulsory leave while the investigation continues. Police said that when the results of the investigation are released, a decision will be made regarding further disciplinary steps.

It was also reported that the riot during the demonstration was being investigated. While twenty one suspects were arrested, among them Farah and his son, all the suspects have since been released.

In response to the decision, Farah said, "Three police officers attacked detainees in front of commanders and other policemen. Two of them threatened the medical staff at Bnei Zion Hospital.

"I expect police commanders and the political ranks to bear responsibility for the culture of lies and violence prevalent in the police force. I expect the police commissioner, the district chief, Haifa station's chief and the Yassam (anti-riot force) commander to apologize to all the detainees who were arrested, beaten and humiliated."

The policeman's family is furious at the latest decision. Attorneys Sami Ilia and Lior Binyamin, who represent the policeman, said, "Why was the officer placed on mandatory leave when the investigation’s findings were not yet issued?"

The officer’s associates added that they are stunned by the decision, saying they have proof that he was not involved in dispersing the demonstration and did not harm anybody. After Farah's arrest, it took more than two days for the police to announce that his claims are being investigated. During his first remand hearing, to which he arrived on crutches, he told the judge, "On Friday morning we landed from abroad. I did not have time and plans to participate in the demonstration, but I educate my children to be involved. My son arrived there after 9pm, after videos had already been circulating from the area of the demonstration."

Haifa disturbance
“I came looking for him because I realized that things were not going well. I saw that Yassam are surrounding the area. I tried to leave the area, and the Yassam men did not let me leave. They attacked the participants and arrested my son and my brother. I approached the patrol car and they shouted at me to get out of here,” Farah said.

He continued, "I left the area and was arrested two blocks away I waited 20 minutes for the car while I was handcuffed. I got to the station and I saw 20 people sitting in one room on the floor. I asked where my son was, I was not even told to shut up, they just broke my foot. Everybody there saw, including the police present. It was hours before they took me with my swollen leg to the hospital.

"There too I heard the policemen threatening a doctor that they will summon him for interrogation. What would they interrogate him for, for declaring my leg being broken?"

The following day, Police Commissioner Roni Alsheikh commented on the affair and on the fact that prior to his arrest Farah appeared standing on his feet in a safe and sound manner.

"Have you never seen a person walk with a fracture?" he wondered. "We talk about chairs flying, a whole pedestrian street turned into a battlefield, throwing stones at policemen and blocking shoppers from entering shops. So obviously there was action and law enforcement activity or the use of force. Has anyone exceeded his powers? As it turns out, we know, as a police force, to deal with this matter and we will deal with it firmly."