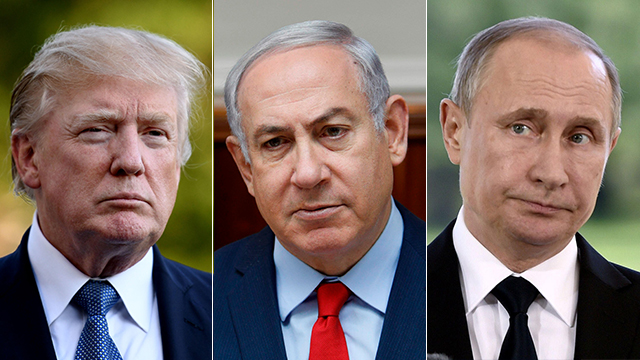 Report: US has reservations about Israel-Russia deal

Asharq Al-Awsat reports Washington wishes to continue exerting pressure on Syrian President Assad, and so it has reservations on Israeli-Russian deal that would see Iranian, Hezbollah troops withdrawn from southern Syria and Assad forces take over.

The United States has reportedly expressed reservations about the understandings reached between Israel and Russia on the withdrawal of Iranian and Hezbollah forces from southern Syria, the London-based Asharq Al-Awsat newspaper reported Saturday, citing Western diplomatic sources.

According to the paper, the American reservations stemmed from the US desire to continue exerting pressure on Syrian President Bashar Assad.

According to an earlier report in Asharq Al-Awsat, the Iranian and Hezbollah forces will initially pull back its forces to within 20 kilometers of the border, and later to a range of 60 to 70 kilometers, with Russia underlining the fact that this was a gradual process.

Assad himself has rebuffed claims of an Iranian military presence in his country, while accusing Israel of launching attacks on his territory and of propagating “lies” about its massive aerial offensive launched earlier in May.

The embattled Syrian president told Russia Today that Iran's presence in his country was limited to officers who were assisting the Syrian army. Apparently referring to the May 10 attack by Israel, Assad said "we had tens of Syrian martyrs and wounded soldiers, not a single Iranian" casualty.

However, Iran-backed militias, including Lebanon's Hezbollah terror group, have played a big role in support of Assad during the conflict. Iran's Revolutionary Guards have also deployed in the country, and scores of Iranian soldiers have been killed in battles with insurgents in Syria, including a number of officers.

Israel, which is deeply alarmed by Tehran's influence in Syria, earlier this month said it destroyed dozens of Iranian military sites in Syria, after Iranian forces fired rockets at Israeli territory for the first time.

Syria's Foreign Minister Walid Muallem echoed his president's claims on Saturday, saying that Iranian military advisers are embedded with Syrian troops, Tehran has no combat forces or fixed bases in the country.

Muallem insisted to reporters that Iran's presence is legitimate and based on an invitation of the government, and that Israel was making false claims to try and pressure Iran, its archrival.

"There are Iranian advisers in Syria some of whom were martyred while working with the Syrian Arab army and their presence is part of an agreement and in coordination with the armed forces on where they should be," Muallem said. "There are no fixed military bases for the Islamic Republic of Iran and what Israel is circulating are lies."

"When the conspiracy against Syria began in 2011 our brothers in the Islamic Republic of Iran came to help Syria in fighting terrorism," Muallem said adding that the Syrian people are "grateful" for this help from Iran.

"As long as there is war on terrorism, Syria as a sovereign state will cooperate with whoever it wants in fighting terrorism," he said.

Muallem denied reports that an agreement was reached between regional and other powers over the situation of southwestern Syria where the country's Golan Heights are located.

On Friday, Russia's ambassador to the UN Vasily Nebenzia said he heard from the news that an agreement was reached on "certain disengagement in the southwest of Syria and, I think, my understanding is that an agreement has been reached."

However, asked about Nebenzia's comments Muallem said no agreement has been reached for southern Syria, adding that Damascus is not currently involved in any negotiations over the area.

Earlier this week, Russia's Foreign Minister Sergey Lavrov said Syrian troops should be positioned on the border with Israel. The area between the southern province of Daraa and the Golan Heights has emerged as a flashpoint in a wider standoff between Israel and Iran, and the United States has warned it will take action to protect a cease-fire there.

The Britain-based Syrian Observatory for Human Rights, a war monitor, reported on Thursday that Iranian troops and members of Lebanon's Iran-backed Hezbollah group are getting ready to withdraw from southern Syria.

A Syria-based official with the Iran-led axis of resistance denied the report.

Muallem reiterated the government's position that it aims to regain control of the whole country.

Syrian government forces, in their strongest position since the early months of the seven-year conflict, have driven rebels out of all territory near the capital Damascus this year.

For weeks there have been reports that the government's next target would be the zone in the south, one of only two large areas left in the hands of fighters seeking to topple Assad.

"We strongly support Russian efforts to drive terrorists out of the Syria-Jordan border and to bring the area under Syrian army control," the secretary of Iran's Supreme National Security Council, Ali Shamkhani, told the Shargh Daily.

He also repeated Tehran's denial that it has military advisors in that part of Syria. "We have said before that Iranian military advisers are not present in southern Syria and have not participated in recent operations," Shamkhani said.