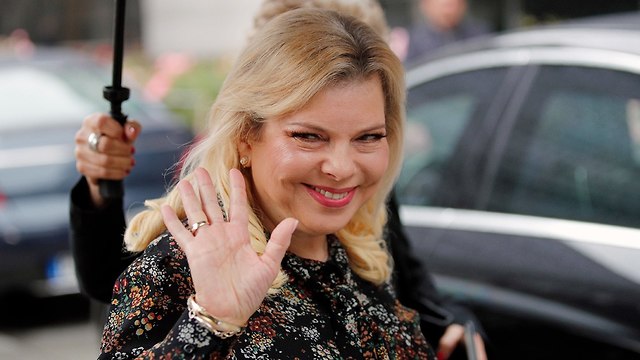 The Jerusalem District Attorney's Office is expected to file an indictment against the prime minister's wife next week after police conclude investigation in the case; no significant progress made with her lawyers on settlement.

Barring any last minute developments, the Jerusalem District Attorney's Office is expected to file an indictment against the prime minister's wife, Sara Netanyahu, in the residence affair next week.

Attorney General Avichai Mandelblit and State Attorney Shai Nitzan are expected to make the final decision on whether to indict this coming week.

Sara Netanyahu (Photo: AP)
The police recently wrapped up additional lines of inquiry following testimony from state's witness Nir Hefetz, the Netanyahu family's former media advisor, but those did not produce any significant information in the case. So far, there has also been no meaningful progress in the Jerusalem District Attorney's Office's talks with Mrs. Netanyahu's legal team over the past month on a "conditional settlement" that would bring the case to a resolution without trial.

Such a settlement would entail Mrs. Netanyahu admitting to the details of the indictment, but not her culpability. She would also accept, according to the settlement, a punishment such as a fine, a suspended sentence or community service.

State's witness Nir Hefetz (Photo: Reuters)
At the end of the week, Mrs. Netanyahu's legal team has asked to renew talks about the settlement, but legal officials say this will unlikely delay an indictment. A senior judicial source said that if the case does make it to court, the talks could serve as a basis for a plea deal with Mrs. Netanyahu. Attorney General Mandelblit set two conditions to a settlement: First, Mrs. Netanyahu must pay back a considerable sum from the NIS 359,000 she allegedly misused rather than a symbolic payment. Then, talks can begin on a plea deal in which the prime minister's wife will admit to a lion's share of the charges and accept responsibility for her actions.

Attorney General Avichai Mandelblit (Photo: Yair Sagi)
Mrs. Netanyahu's lawyers have reportedly offered to have her pay over NIS 200,000 of the money, but the State Attorney's Office rejected the proposal out of hand. According to the indictment, from the beginning of September 2010 at the latest and until March 2013, Sara Netanyahu acted in conjunction with former deputy director-general of the Prime Minister's Office Ezra Saidoff to create a false impression according to which no cook was employed at the prime minister's official residence in Jerusalem.

Ezra Saidoff (Photo: Motti Kimchi)
The pair allegedly colluded to circumvent regulations that stated that if no cook was employed at the official residence, "prepared cooked food could be ordered to the residence according to need."

In so doing, the pair supposedly sought to obtain state financing both for employing the cooks working at the residence and for ordering ready-made meals and chefs to cook at the residence.

Funding for hundreds of meals from chefs and restaurants was thus allegedly obtained, costing the public NIS 359,000.