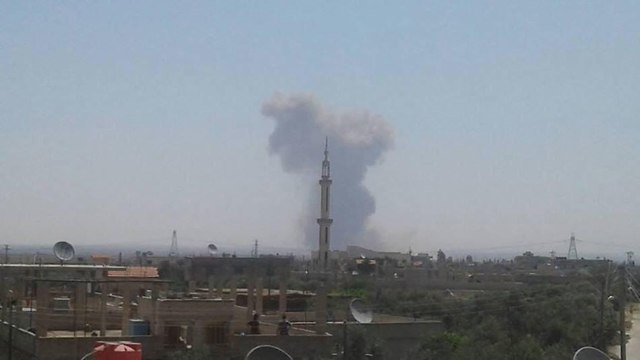 Prime Minister Benjamin Netanyahu warned Thursday evening that “whoever drags us into a conflict will very much regret it,” in reference to the surge in tensions on Israel's northern and southern border.

"Dangers are all around us—and the Air Force has a central role in thwarting them. The aggression in our region of Iran and its proxies is not fading. Iran has etched on its banner the desire to destroy us. I state unequivocally: We will not allow Iran to develop nuclear weapons," the prime minister said as he delivered a speech during an Order of the Wings ceremony at the Hatzerim Air Base in south Israel, marking the conclusion of a pilots course from which 33 men and three women graduated.

"We will continue to take strong action against Iran's plan to turn Syria into a deadly missile base against us," he vowed.

The number of people forced to flee their homes in southwestern Syria as a result of the two-week escalation in fighting has climbed to 270,000 people, the UN refugee spokesman in Jordan said.

The United Nations said last week 160,000 had been displaced as they fled heavy bombardment and mostly took shelter in villages and areas near the Israeli and Jordanian borders.

The United Nations has warned of a humanitarian catastrophe in the southwest caused by the fighting that erupted after a Russian-backed army offensive to recapture rebel-held southern Syria.