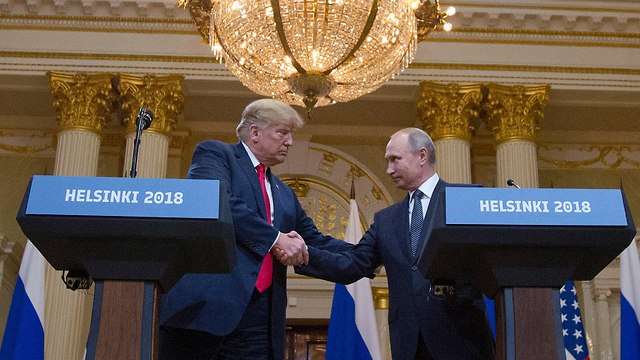 In interview with Fox News after meeting with his Russian counterpart in Helsinki, President Trump says Putin is 'a believer in Israel, he’s a fan of Bibi,' and will continue to 'help him a lot.'

US President Donald Trump said overnight Monday that he and Russian President Vladimir Putin had reached “a really good conclusion for Israel” during their summit in Helsinki, but did not elaborate on the details. “At the end of this meeting I think we really came to a lot of good conclusions, a really good conclusion for Israel, something very strong. He’s a believer in Israel, he’s a fan of Bibi,” Trump told Fox News about President Putin, using Prime Minister Benjamin Netanyahu’s nickname. “And (he’s) really helping him a lot and will help him a lot, which is good for all of us,” the president said.
President Trump talks about Israel and Putin
X

During a joint press conference after the two leaders’ one-on-one meeting, Trump said that the United States and Russia will work together to ensure Israel's security, adding that Netanyahu had been consulted on the matter. "We both spoke with Bibi and they would like to do certain things with Syria having to do with the safety of Israel," Trump told reporters. "Russia and the United States will work jointly (in this regard)." "Working with Israel is a great thing and creating safety for Israel is something both Putin and I would like to see very much," Trump said.

(Photo: AP)
Putin said Trump had spent a lot of time talking about Israel during their talks. The conditions were in place for effective co-operation on Syria, Putin added. Washington and Moscow back different sides in the eight-year-old civil war.

Netanyahu's office issued a statement shortly after the press conference.

"Prime Minister Benjamin Netanyahu commends the abiding commitment of the US and President Donald Trump to the security of Israel, as expressed at the meeting between President Trump and Russian President Vladimir Putin. The friendship between Israel and the US has never been stronger," the Prime Minister's Office said.

"Prime Minister Netanyahu also very much appreciates the security coordination between Israel and Russia and the clear position expressed by President Putin regarding the need to uphold the 1974 Separation of Forces Agreement between Israel and Syria."

(Photo: AFP)
The US president also praised the strong ties that had been forged with Israel and his administration, signalling that preserving Israel’s security is a priority for both leaders.

“Never has any country, has anyone been closer to Israel than we are,” Trump said in response to a reporter’s question.

Prime Minister Netanyahu has made repeated visits to Russia in an effort to persuade Putin use its influence in Syria to remove all Iranian forces from near the Golan Heights, the latest of which took place last week in a trip to Moscow during the World Cup.