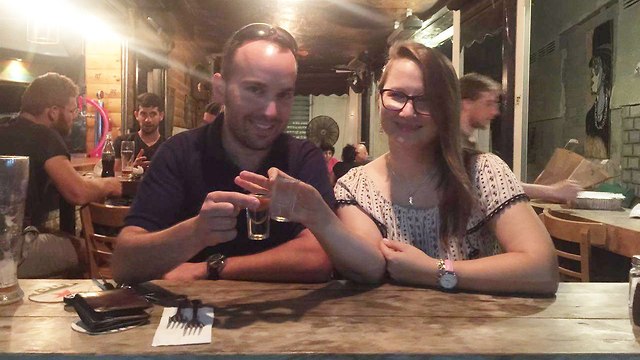 Some residents from one of the south's hardest-hit cities by Hamas rocket fire say they feel a sense of duty to continue their daily routine, while some argue media has blown dangers out of proportion, but as restaurants and pubs are still teeming with people, customers always make sure that a bomb shelter is never too far away.

Residents of the city of Sderot—one of the hardest-hit areas by Gaza attacks—were determined to lead as normal lives as possible on Thursday night by visiting restaurants and pubs as some 200 rockets slammed into southern Israel and as Code Red alerts continued to send them running into nearby bomb shelters. “We deserve to chill out a little bit,” Shlomi Levy told Ynet. “My wife, Alex, and I work hard every day in a high-tech company and we wanted to go out on a Thursday evening.”

Shlomi and Alex Levy (Photo: Roi Rubinstein)
Alex said that she had not gone into work on Thursday morning due to lack of sleep but added that she was not frightened to enter downtown Sderot.

“There are loads of bomb shelters here so there’s no need to be scared,” said Alex, who like every other resident of the border city, has become accustomed to the normality of taking shelter in the nearest safe room.

“I think the media is making more of it than it actually is. We could have lived in Tel Aviv and had parking problems. Here, we have this problem,” Alex said with a touch of sarcasm. Some 200 rockets were fired from Gaza between Wednesday and Thursday, with the IDF retaliating with heavy bombardments in the strip, destroying a 5-story building, as well as several terror tunnels, military complexes and other targets. Oshri Dahan, 23, who owns a local burger place, says that there are fewer people visiting his food establishment than on a regular day. But he is still happy, he added, with the the number of customers. “There are fewer people than usual on Thursday evening, but many ordered deliveries or got takeouts because they want to be near to a bomb shelter,” he said, adding that he at no point seriously considered keeping his burger joint closed in light of the escalation of hostilities with Hamas. “There was a little consideration but in the end I decided to allow the residents to come in. We have a safe room nearby and everything is alright,” Dahan said. Among those enjoying the nightlife and sitting in one of the buzzing pubs was 18-year-old Shir Levy, who said that she felt a sense of duty to go out, especially on Thursday night.

Be'er Sheva light festival (Photo: Roi Rubinstein)
“I came here to break the routine, to leave the house for a bit and the commotion and to sit outside and eat. We came spontaneously to get away from the situation. When we come in we check if there is a bomb shelter and where we need to run if necessary,” Levy explained.

One couple said that they refused to change their plans to eat in a restaurant on Thursday evening despite the rocket attacks.

“We live in Netiv HaAsara and there are feelings which come and go,” said Peleg Boyom. “I, at least, am not bothered about it. It’s another scare and we are used to it. Our dog is the only one which is actually scared. Once it was in the north and now it is our turn. But it cannot be allowed to disrupt our routine.” His partner, Mor Baider, agreed. “One of the things I promised myself was that my routine will not be harmed. We have to continue as usual. We invite everyone to come and eat here in Sderot,” she said. But while the efforts to lead a normal life continue, not all residents are able to deny the pervasive sense of trepidation. “I live here and there is always fear, especially because of our children and grandchildren, but we just want the government to do its work,” said one resident. “We need to hit them from the air. We will take everything, but their (Hamas’s) head has to go.” Outside a local supermarket, where elderly residents had assembled, Shushan Sara said that he voted for Prime Minister Benjamin Netanyahu in the last election, and would do so again. “Bibi is not the problem. We are in a kind of boxing ring. We throw a punch, knock them down and they get up. They get up fast or slowly but they get up and keep going,” he said.

“I call on Bibi to ‘wipe them out.’ Flatten this building and now take out the leaders. Their leaders are not in danger, they don’t live in poverty. They live in villas with swimming pools. Wipe them out so they know what it feels like to live without a home. We should start from there and if it’s necessary to wipe them out, we’ll wipe them out.”

Some 45,000 people participated on Thursday night in the light festival held in Be’er Sheva—the largest city in southern Israel—which was hit by one long-range rocket fired from the Gaza Strip on Thursday afternoon for the first time since Operation Protective Edge four years ago. The rocket landed in an open area in the city shortly after 3pm.

“My parents were worried but I wasn’t. The truth is that this is simply routine. We are used to it. There is always a new operation, a ceasefire, no change. The people have become used to it. I already forgot that there was a siren today,” said Liat Gurvitch, who attended the festival.

Despite the apparent lack of fear expressed by some of the residents, the number of visitors to the festival was smaller than usual. However, those who did attend were adamant that normality had to continue even as tensions mounted.

“We waited a long time for this festival,” said one participant. “We heard about it a long time ago and we had big expectations. We decided not to miss it despite what happened. We’re not afraid of sirens. In any event we wouldn’t hear it here. We thought about a scenario where there is a Code Red alert but we’re continuing as normal. If the Home Front Command says the event can take place, who am I to say otherwise. Many chose to do the same as we did. We didn’t put our lives on hold.”

Undeterred by the rocket, the resident added that she was not frightened by the prospect of a Code Red alert. “It doesn’t frighten me. Worst case scenario there will be a siren. It is a bit worrying to come here with our children but they need to learn to get used to it.

Israel and Hamas have reportedly reached a ceasefire under Egyptian mediation, which went into effect at 10:45pm Thursday, according Al Jazeera.