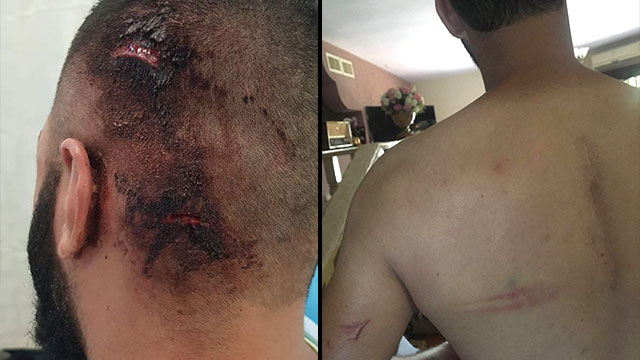 The terrorists among us

Op-ed: The attack on 3 Arab youths at the Haifa beach last week was no less than Jewish terrorism. And we must not show understanding or leniency towards violence against Arabs just because of 'what the other side is doing to us.' Violence must be eradicated with a firm hand.

Because when eight young men check the identity of other young men, and then barbarically beat them as soon as they learn they're Arabs, there's no need to understand the motives, and there's certainly no need for calls along the lines of "In blood and fire we'll save Judea."

Following the horrendous terror attack at the Charlie Hebdo magazine, many commentators and experts were interviewed in the European media. All of them, without exception, condemned the terrorists. However, many of them then added the word "but," which was followed by understanding, justifications and victim blaming. "But it's because of NATO's bombing in Iraq and Syria"; "But it's because the magazine offended Muslim sensitivities"; "But it's because of what Israel is doing to the Palestinians"; "But it's because of the discrimination they suffer from." There were a lot of justifications there. Author Salman Rushdie referred to them as the "But Brigade." Because anyone who condemns, but then immediately moves to "but," is not really condemning—he's supporting. This is exactly the story of those in the gray area between "understanding" and "justifying" terror attacks against Jews, and this is exactly where we must not be when dealing with Jewish terrorists.

funeral of Ahmad Muhammad Mahamid
There is also no need for generalizations. The fact that hundreds shouted "In blood and fire we'll save Palestine" at the funeral of Ahmad Muhammad Mahamid a week ago doesn't turn all Israeli Arabs to supporters of murder and terrorism. And the fact that among the Jewish public there are a few who carry out abominable acts, or support them, doesn't turn Israel into a racist and inciting state. There is official incitement in the Palestinian Authority against Israelis and Jews. Here and there, there is also incitement against Arabs in Israel. But it's like comparing apples and oranges. Palestinian terrorism is the result of incitement. The fact that Jewish terrorism—such as the murder of the Arab teen Mohammed Abu Khdeir—is a rare, very rare occurrence, is the result of the lack of incitement.

When there's anti-Arab violence, as there was last week, we need to destroy the evil from within. It's true that there's violence without nationalistic motivations, but there's no need to deny that this time the incident was nationalistic in nature. And the fact there is another kind of violence, a "regular" one, does not take away from the severity of the nationalistically motivated violence.

And the fact that inside Israel there is Arab violence against Jews—even if it's a rare occurrence—does not justify leniency when it comes to violence against Arabs. The violence must be eradicated with a firm hand. No forgiveness. No understanding. And if the punishment of Jewish hooligans is lesser by even an inch than the punishment of Arab hooligans under similar circumstances—that would be racism and the encouragement of violence.

It's important to remember one more thing: words have meaning. The common delusion that "we need to let them blow off steam" is untrue. Because there is a difference between claims of discrimination, even if they're not true, and justifying terrorism—both directly and indirectly, both Arab and Jewish terrorism. So the lines should be moved. Sometimes inciters must be silenced to prevent violence. That is perhaps not the only way to prevent the next incident, but it is definitely a measure that needs to be implemented.