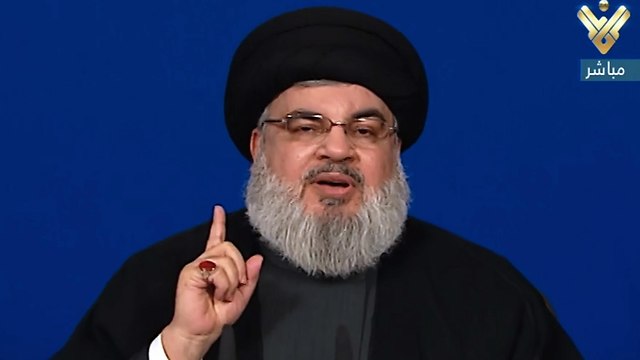 The parallel universe of Hassan Nasrallah

Analysis: Listening to the Hezbollah leader's speech, one would come to believe that a US-Saudi-Zionist conspiracy is behind the Syrian civil war and efforts to destabilize Lebanon; Nasrallah portrays his organization as saviors of the Arab world from Sunni jihadists when in fact only Russia's intervention saved Assad and allowed Hezbollah to claim credit.

Hezbollah leader Hassan Nasrallah spoke Sunday in honor of the "Second Liberation Day on the Lebanese-Syrian border," in which the organization marked the Liberation of Lebanon from the Syrian rebels and during which he laid out the organization’s worldview: Hezbollah is a stabilizing force in the region. It is defending Lebanon, and defeated Israel and the rebels including ISIS. As far as Nasrallah is concerned, the Syrian civil is a failed American-Saudi-Zionist conspiracy.

Before you start laughing, you should ask the Arab-speaking Israelis among us how many of them believe the theory; you will be surprised by the response. Who is Nasrallah threatening this time (other than Israel)? And what is the conspiracy theory that is so persuasive in the Arab sector?

They defeated ISIS and the rebels

Nasrallah's speech delivered in classical Arabic was broadcast on a screen at the Hezbollah celebrations in al-Hermel in the Lebanon Valley, on the northeastern border with Syria, which until recently had been threatened by the Syrian rebels.

Nasrallah was of course careful not to leave his secure bunker, apparently located in Dahiya, the southern suburb of Beirut. It seems that he is afraid of the new enemies he has accumulated in the civil war even more than he is afraid of Israel. At the beginning of the speech, Nasrallah congratulated those present for the first anniversary of the organization's victory in this region and the liberation of the entire border area from the Syrian rebels. He praised the martyrs who sacrificed themselves, and saved the whole of the Lebanon Valley from the hands of Sunni jihad organizations. In his speech he raised the following questions: What would have happened if ISIS and Jabhat a-Nusra had won in Syria? What would have been the fate of the Middle East had ISIS won in Iraq? And what would these organizations do in Lebanon?

Hezbollah rally
Nasrallah described the appalling violence used by these Wahhabi organizations against their Sunni "brethren" in areas under their control, and scorned the Lebanese government for not joining the struggle against the rebels in Syria at the beginning of the civil war, because many in Lebanon supported them. Those who acted responsibly, in his view were the axis of resistance, i.e. Iran, the Syrian regime, and Hezbollah. According to Nasrallah, any Lebanese person who opposed their interference seven years ago now understands its importance for the rescue of Lebanon. In the speech, Nasrallah explained that Hezbollah's entry into Syria was a defensive war for Lebanon and not an invasion, and that the organization's victories in al-Qusayr, Kalmon, the Damascus suburbs, a-Zabdani, and Jarud Arsal near the Lebanese border were what prevented the invasion of Lebanon by those “Takfiri”—those who consider the rest of Muslims as infidels and cheapen their blood.

Who is afraid of war?

In his speech, Nasrallah emphasized the mobilization of Hezbollah youth and the enthusiasm they demonstrated in fighting. He explained that unlike previous generations in Hezbollah, the quality of the fighters stems from their high school and academic education as well. They are educated in the footsteps of Hussein Ben Ali, "the father of the martyrs," who was the grandson of the Prophet Muhammad and was willing to sacrifice himself in Karbala, Iraq, for the sake of justice. The Shi'ites blame the Sunnis for the murder of Hussein.

According to Nasrallah, the situation in Israel is the opposite: there is a crisis of enlistment for combat units due to poor motivation and the lack of a desire to sacrifice for the homeland, and tens of thousands of soldiers seek leave on mental health grounds. He cited Israeli experts who say Israel is not prepared for the next war, despite the IDF arming itself with the best military technology. At one point, Nasrallah raised his voice and claimed that following the "Israeli defeat" in the Second Lebanon War, Hezbollah had achieved deterrence and that since then Israel has not dared to attack Lebanon. He added that the American sanctions did not affect the organization at all and that the Shi'ites in Lebanon were living well and are not materialistic. The “second Liberation Day” celebrates the liberation of all of Lebanon from the Syrian rebels, while the “first Liberation Day" marked on May 25, is a holiday invented by Hezbollah to mark the liberation of Lebanon from the "Zionist enemy" after the Israeli withdrawal from south Lebanon in 2000. Thus Nasrallah presents Hezbollah as the shield of Lebanon against external invaders.

According to Nasrallah, the US is behind ISIS and assists them militarily. Washington has threatened to impose sanctions on Lebanon if Hezbollah continues to intervene in Syria.

According to Nasrallah, while Hezbollah, the Iraqi army (whose commanders are Shiite) and the Syrian army fought against ISIS, the US has actually been working on extending the lengthening of ISIS, just as it helped al-Qaeda in Afghanistan in the 1980s.

But according to Nasrallah, anyone who relied on American aid ultimately lost, as happened to the Shah in Iran, who was abandoned by the US. The US has no ideology, in Nasrallah’s eyes, but only economic interests, primarily oil. He added that Israel also abandons its friends when they no longer serve its purposes, as Israel abandoned the South Lebanon Army when it left Lebanon in 2000. Nasrallah specifically pointed to the joint US-Saudi military headquarters in northern Jordan, known as the Military Operations Center (MOC), which he says is controlling the war in Syria behind the scenes and in full coordination with Israel since 2013.

Assad meeting Iranian official (צילום: AP)
In the past year, the Americans have also abandoned the rebels in southern Syria and the region was recaptured by the Syrian regime. Nasrallah asked: Why does the United States oppose the war against al-Qaeda in Idlib, the last pocket of rebels in Syria? They are defined as terrorists by the international community. Nasrallah also called on the world to prepare for another "chemical show," meaning that the rebels in Idlib would claim that the Syrian regime was killing them with unconventional weapons. He claimed that the rebels would use this weapon against civilians in areas under their control in order to mobilize the international community to their advantage and provide an excuse for an American attack against the the axis of resistance.

The Kurds will be abandoned

The International Court of Justice found that Hezbollah activists were involved in the assassination of former Lebanese Prime Minister Rafik Hariri . Nasrallah threatened elements in Lebanon who intend to cooperate with the tribunal: "Do not play with fire." The secretary general of Hezbollah spoke of the area east of the Euphrates in Syria which is controlled by the Kurds and advised them to continue negotiations with the Syrian government because the Americans would soon abandoned them as well, adding that the Americans had also abandoned the Palestinian Authority and that the trump administration plans to remove the matter of Jerusalem and the refugees from the agenda. According to Nasrallah, the triangle of evil is Trump, Netanyahu and Mohammed bin Salman, the Saudi crown prince — corrupt and greedy people who want to run the Middle East and eliminate the Palestinian issue. Nasrallah responded to the claim that Hezbollah had taken control of Lebanon and said that these were old accusations, ignoring the fact that Hezbollah is the largest political party in Lebanon, a party that is justifiably worthy of interfering in state affairs (more than 30 percent of Lebanese are Shi'ites). He also said that the purpose of this claim is to blame the organization for the economic crisis and other problems of Lebanon. He is careful not to mention Iran, which is the true boss in Lebanon today. Are you convinced?

In the Land of Conspiracies

The ISIS and Jabhat al-Nusra phenomenon has become Hezbollah's most important tool to whitewash its crimes. Lebanese militias committed heinous crimes against the Sunni population in Iraq and Syria in the name of the war against ISIS.

Nasrallah did not save Lebanon, but on the contrary, he brought it into the war in Syria and caused the rebels to invade northern Lebanon in retaliation. He sent young Shiites to their deaths in order to continue receiving funds and support from Tehran and to train his fighters for the next war against Israel.

(Photo: AP)
It is important to note that it was not the assistance of Iran and Hezbollah that saved Assad from collapse in 2015. Had Russia not intervened in the war in Syria, Hezbollah would have been crowned the main culprit in attracting jihadist organizations into Lebanon and in the destruction of the state. That is also the reason Nasrallah removed any mention of Iran from his speech. He did not mention Russia either, in order to win credit for Putin's achievements. Lebanon's difficult economic situation is also largely due to the transformation of Lebanon into a Hezbollah-Land, a country subject to terrorism and drug trafficking, a country that spooks investors and is subject to international sanctions. The balance of deterrence that has been established since 2006 is the opposite of what Nasrallah described: It is Israel that created a situation in which Hezbollah no longer fulfills its goals — to attack it. As far as Hezbollah is concerned, those who fought ISIS and Jabhat al-Nusra, that is, Hezbollah, Assad and Iran, are automatically on the good side, but in reality these are terrorist organizations fighting each other, and at the moment Hezbollah is on the winning side —thanks to the Russian intervention. Shiite terrorism is replacing Sunni terrorism. The worrisome phenomenon is Hezbollah's success on the propaganda level. Many of the Arabs in Lebanon, Syria and even Israel believe Nasrallah's words. As far as they are concerned, the war in Syria did not break out as a result of prolonged and severe repression, but rather because of an Israeli-American-Saudi conspiracy to topple Assad. As far as they are concerned, Hezbollah is not a cancer spreading throughout the body of Lebanon, but rather it is the one that saved Lebanon from the Jihad organizations. They believe that Israel was not neutral in the war in Syria, but rather supported the rebels against the regime while ignoring their affiliation with al-Qaeda. According to them, Israel and Saudi Arabia are working together to push aside the Palestinian issue and promote Trump's "deal of the century." Sounds delusional? Ask your Arab neighbors, and you will be surprised by their reactions. Dr. Yaron Friedman, is a Ynet commentator for Arab affairs, he is a graduate of the Sorbonne University in Paris, a lecturer on Islam and an Arabic teacher at the University of Haifa in the Middle East and Islamic Studies Department. His book “The Alawites — History, Religion and Identity” was published in English by Brill-Leiden in 2010.