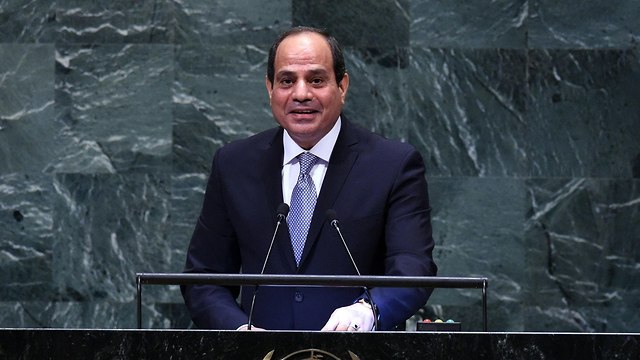 Sisi at UN: conditions for peace are known

Egypt's President Abdel Fattah Sisi told the UN General Assembly on Tuesday that “there is no time to waste on arguing" over the Israel-Palestinian conflict, while stressing that the conditions for a final peace accord are known.

"The final conditions to reach an agreement between Israel and the Palestinians are known," Sisi said at the annual gathering. "The perseverance to renew negotiations and to reach (a peace) agreement is needed here."

"I reiterate what I've said many times before, including on this podium—the Arabs are willing to extend their hand to peace. The Arab nations are entitled to turn this tragic page in the history books and the Palestinian people are entitled to implement their legitimate rights," the Egyptian president said.

"We cannot speak of peace agreements as a basic principle of the UN and as a sign of credibility without mentioning the Palestinian issue."

The fact that the conflict has yet to be resolved, Sisi said, was "a perfect example of the international community's failure to find a just solution based on the international legitimacy of the UN resolutions which support the establishment of a Palestinian state with east Jerusalem as its capital."

It was not immediately clear whether whether Sisi will meet with Prime Minister Benjamin Netanyahu, after an Israeli official told Reuters such meeting would take place in New York.

Journalist Yasser Razaq, chairman of the Egyptian Akhbar El Yom newspaper, said the meeting is scheduled for Wednesday, adding that President Sisi is expected to raise the issue of the two-state solution, which in Egypt president’s opinion, should be an "integeral part of the US peace plan,” the journalist stressed.

Both leaders met in public for the first time in September 2017 in New York. Egypt was the first of a handful of Arab countries to recognize Israel under a US-sponsored peace accord in 1979 and the two countries maintain close co-ordination on security.

Last month, Ynet learned that Netanyahu secretly met with Sisi once again but the Prime Minister's Office refused to comment on the issue.

Past meeting of PM and Sisi (Photo: Avi Ohayon, GPO)

Speaking shortly before Sisi, Jordan’s King Abdullah told the UN General Assembly that “only” a two-state solution based on the pre-1967 borders with east Jerusalem as the capital of a future Palestinian state could produce comprehensive peace deal between Israel and Palestinians.

"Only a two-state solution based on international law and relevant UN resolutions can meet the needs of both sides: an end to conflict, a viable, independent, sovereign Palestinian state on the 1967 borders with east Jerusalem as its capital, and a secure Israel, fully part of its own region, recognized by Arab and Muslim states around the world,” Abdullah said in his speech, delivered in English.

The leader of the Hashemite kingdom also categorically rejected the notion of a bi-national state “whose very foundation is a rejection of the equality of its own people.”

Any peace accord based on a bi-national state, he said, would constitute “the ugly, undemocratic reality.”

US President Donald Trump told the General Assembly he is committed to brokering a peace deal between Israel and the Palestinians, stressing that the goal can only be advanced by acknowledging “obvious facts.”

“This year we also took another significant step forward in the Middle East in recognition of every sovereign state to determine its own capital. I moved the US embassy in Israel to Jerusalem," Trump said in his 35-minute speech.

In response to Trump's speech, French President Emmanuel Macron delivered an implicit rejection of the US president's initiative, telling the General Assembly that the “unilateral initiatives or trampling on the legitimate rights of the Palestinians will not solve the Israel-Palestinian conflict.”

“There is no credible alternative to the two-state solution,” Macron said.

When came the turn of Iranian President Hassan Rouhani to speak before the General Assembly, he accused Israel of being a menace to world peace.

“Israel, which has a nuclear arsenal and is blatantly threatening others with nuclear annihilation, is the most terrifying threat to the peace and stability of the region and the world," Rouhani said.

President Rouhani (Photo: Reuters)
He also slammed Israel’s recent passage of the Nation-State Law, saying it was another clear example of the country being an apartheid state. Turkish President Recep Tayyip Erdoğan also took the podium at the General assembly, stating that “those who remain silent in the face of repression against the Palestinians only embolden their oppressors.”

The remarks appeared to be intended as a swipe against Trump whose series of decisions have angered Palestinians and their allies.

“Even if the world turns its back, we will continue to be by the side of the oppressed Palestinians and we will defend the legal status of Jerusalem,” Erdoğan asserted.