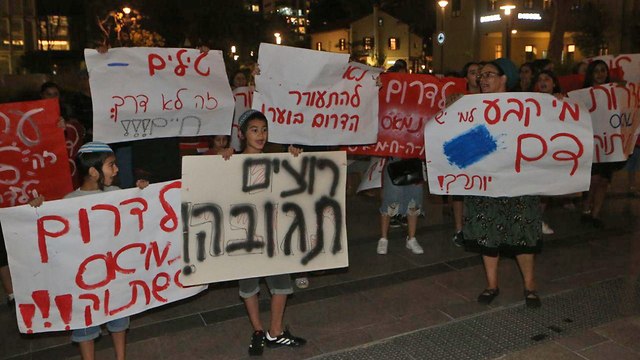 Dozens of residents from Gaza border communities protest in Tel Aviv after rocket barrage launched at southern Israel over weekend; 'we are under continuous attack,' they say.

Dozens of residents from Gaza border communities protested in Tel Aviv on Sunday evening against the current wave of rockets launched from Gaza over the weekend, and "Israel’s lack of reaction."

The protesters blocked major roads and sounded the Code Red siren in the Tel Aviv streets.

The rally’s organizers said that, “the Gaza border region residents are under continuous attack and the moves are not called by the Israeli government, but by terror groups in the Gaza Strip.”

Despite the IDF’s decision to remove all restrictions placed on the Gaza border region following an escalation of hostilities over the weekend, the residents of the communities adjacent to the strip announced Sunday they will not send their children to school in an act of protest against the continuing violence.

During the rally protesters called “brothers, wake up, the south in on fire,” and “Tel Aviv wake up, our blood is being spilled.”

Tomorrow the protesters are planning to block the Kerem Shalom crossing and not allow the fuel supply trucks to enter the strip.

Miri Asulin from Sderot, described the weekend’s events: “My sons and I were walking through a 500 meter long area that has no shelter access, and then rockets were fired and the Iron Dome started intercepting them above our heads.”

“My older son protected his youngest brother with his body. We’re tired of being sitting ducks, we’ve been suffering from anxiety for 17 years,” Asulin added. “We have the best soldiers in the world, they have to destroy the terror organizations.”

Shira Masami from Sderot explained that the residents demand security. “We are enraged that after an entire Shabbat of rocket attacks, day and night, nothing is being done. We don’t want to raise children under rocket attacks.”

Meirav Cohen from Kibbutz Ein HaShlosha said in an interview with Ynet that the protest does not have political purposes and stems out of sheer frustration.

"There is no political body behind us, we organized this on our own. It is an authentic protest that was created out of pain and frustration over the security situation—which has become intolerable”.

“We expect all the communities in the Gaza border region to join us because it is the only way to stop another round of escalation from occuring," she vented.

Iron Dome interceptions. (Photo: Reuters)
Israeli Air Force aircraft struck dozens of terror sites across the Gaza Strip early Saturday in response to some 39 rockets launched into Israel from Gaza, in the heaviest exchange of fire since August.

Out of the 39 rockets launched into Israel, the Iron Dome missile defense system intercepted 17. Two rockets landed inside the Gaza Strip and the rest landed in open areas in Israel. This was the heaviest barrage of rockets since early August, when 150 rockets were fired in two days. The IAF struck 80 targets of terror sites across the Gaza Strip in response. One of the targets destroyed was a building that served as Hamas' general security headquarters in Gaza's al-Daraj neighborhood.