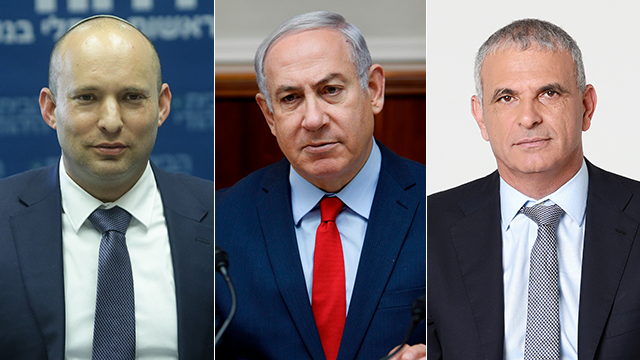 As the government faces the prospect of a narrow one-vote majority on its final year, Finance Minister Kahlon and Education Minister Bennett are pushing for early elections in March; Netanyahu tries to lay blame on the two senior ministers, and calling 'not to bring down right-wing government.'

With early elections now appearing almost inevitable in the wake of Yisrael Beytenu leader Avigdor Lieberman's resignation and Education Minister Naftali Bennett's demand for the defense portfolio, Prime Minister Benjamin Netanyahu and other coalition leaders appear to be looking to lay the blame at the feet of someone else. Netanyahu, who has himself considered calling early elections, now wishes to continue with the current government until the end of its term in November 2019, rather than hold snap elections in March 2019.

The prime minister met with Finance Minister Moshe Kahlon, who heads the Kulanu party, and Interior Minister Aryeh Deri, who heads the Shas party, on Thursday—both of whom urged him to call early elections.

Minister Bennett, Prime Minister Netanyahu and Minister Kahlon (Photos: Reuters, AFP, Dana Kopel)
On Friday, Netanyahu met with Minister Bennett, who heads the Bayit Yehudi party, to discuss the latter's demand to be appointed defense minister after the position had been vacated by Lieberman. Bennett threatened to bring down the government if his demand is not met. The prime minister apparently told the education minister he was willing to give him the defense portfolio, "but there is no political support" for such a move. Netanyahu did admit to Bennett it would be difficult to maintain a government based on a narrow coalition that only has a one-vote majority in the Knesset.

"I have problems in the Likud party with (MKs) Oren Hazan and Yehuda Glick, and in Kulanu I have issues with Rachel Azaria. It's hard to run a coalition like this," Netanyahu told Bennett.

Bennett arriving at the Prime Minister's Residence in Jerusalem on Friday (Photo: Yoav Dudkevitch)
At the end of the meeting, each side issued a statement about its content and results that contradicted the other. A Bayit Yehudi official explained that "it appears that in light of Minister Moshe Kahlon's insistence on holding elections as soon as possible, there is no possibility of continuing with this government. On Sunday, the coalition heads will coordinate the date for the elections."

Meanwhile, the prime minister canceled the coalition heads meeting scheduled for Sunday morning, as well as a Likud ministers meeting.

"There's some blame game on who would be the doctor who declares the patient dead," he went on to say. "There's no government... we haven't had a government in two weeks now. A government that doesn't evacuate Khan al-Ahmar and erodes the deterrence is not a government and not the Right, that's why we're going to elections."

The prime minister, meanwhile, claimed he has not yet given up the possibility of saving the coalition and preventing the government from collapsing. His close associates called on Bennett to show responsibility and not lend a hand to the premature end of the government.

Ministers Kahlon and Bennett (Photo: Motti Kimchi)
"It's important to make every effort to preserve the right-wing government," Netanyahu said, "and not repeat the historical mistake of 1992, when the right-wing government was brought down, a left-wing government was elected, and the Oslo disaster was brought upon the State of Israel." A statement released on behalf of Netanyahu said that "The prime minister told Minister Bennett that the rumors a decision has been made to go to elections are not true. The prime minister updated Minister Bennett that in the immediate future he will be taking on the defense portfolio, in light of the critical challenges the State of Israel currently faces. At the beginning of the week, the prime minister will hold talks with the heads of the coalition, and he trusts the sense of responsibility of the ministers, who won't make the historical mistake of bringing down a right-wing government."

Netanyahu himself laid the blame on Kahlon. Minutes after the end of Shabbat, he tweeted: "If the Kulanu party doesn't bring down the government—we'll still have a government," adding, "All members of the Likud party are interested in continuing to serve the state for another full year, until the end of the term in November 2019."

Kahlon rejected Netanyahu's attempts to pin the government's collapse on him, saying these were "media spins that don't work on me anymore... he can threaten his friends in the Likud party, but not me. I don't work for them."

Kahlon rejected reports he had vetoed Bennett's demand to be appointed defense minister, saying "I don't appoint ministers, and I wasn't asked about it. I have no issue with Bennett or any other candidate."

However, he reiterated his position that it would be impossible to run the country with only a one-vote majority in parliament, particularly in the final year of the government's term. "This would mean complete anarchy. I won't abandon the economy for two or three more months in the government," he said.

Kahlon is expected to speak with Netanyahu again on Sunday in a meeting pushed from 9am to 6:30pm. "Maybe he'll pull a rabbit out of the hat during the meeting, even though I don't know of any such rabbits or any such hats. But unless there's a new rabbit to convince me, I'll support the law to dissolve the Knesset and move forward the elections," he said.

Coalition officials said Kahlon and Bennett have coordinated their positions, and that they intend to lead a united front against Netanyahu, pushing for early elections that would be held on March 12 or 26. The two spoke at length on Friday, after the former's meeting with the prime minister, and reached the conclusion a narrow coalition could not survive.

Senior officials in Shas tried to play sides, with one official saying "The Shas movement doesn't oppose going to elections. Shas is ready to go to elections at any date in light of the excellent achievements it had in the municipal elections. However, if the prime minister wants to continue with the current government, Shas would support that."

But before the Knesset could be dissolved, Minister Kahlon will bring a bill proposal to the government's approval on Sunday to add some NIS 22 billion over the next 17 years to pensions for police officers and prison guards. The funding for the proposal is supposed to come, inter alia, from NIS 1.3 billion in cuts to government ministries.

The move naturally faced objection and criticism from the different ministries, with many government officials viewing it as a "underhanded opportunism for campaign purposes."

While Public Security Minister Gilad Erdan supported the move and stressed that the new funding was agreed upon long before the current political crisis had erupted, and that it is based on a decision made by the labor court, he nevertheless objected to the proposal that would see his ministry bearing the onus of the cuts.

Deputy Health Minister Yaakov Litzman, who doesn't vote on government decisions, and Agriculture Minister Uri Ariel also came out against the cuts to their respective ministries.

The cuts will also fund the hosting of the Eurovision Song Contest in Israel next week, which will cost an estimated NIS 150 million.