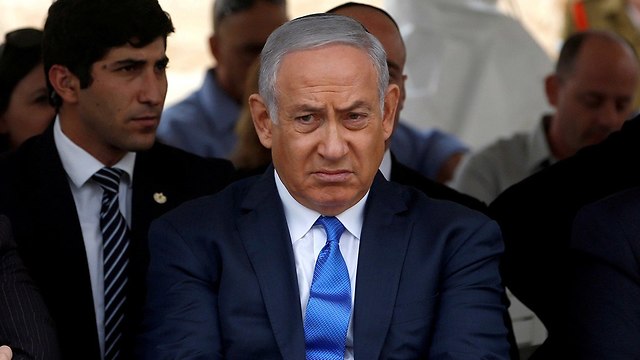 Op-ed: The prime minister's speech Sunday is one of the most dangerous deliveries heard in recent years; Netanyahu strikes fear in our hearts, and could even launch military operations just to survive another term; the longer he succeeds in delaying the next elections, the more likely it is a military conflict might arise.

Prime Minister Benjamin Netanyahu's "I am Mr. Security from Sayeret Markal and I've made hundreds of important decisions" speech on Sunday is one of the most dangerous deliveries heard in recent years. This speech calls for a great deal of verbal—and perhaps literal—security maneuvers in the coming weeks and months. The prime minister could take military action in Gaza, in the north, maybe elsewhere—all in an effort to repair the damage caused to his "Mr. Security" image by last week's events in Gaza and present Avigdor Lieberman's resignation as irresponsible, a man who jumps ship in the midst of an existential storm.

And not just any storm, the prime minister is already talking about the outcome of this mysterious security incident that is yet to come. “In the midst of a battle we don’t abandon our posts…We will overcome our enemies, and I tell you in advance, it will require sacrifice,” he said, making it sound like we're in the eve of the Arab armies' invasion to the State of Israel in the War of Independence.

This is the man. This is the fear he strikes into the hearts of Israeli citizens just to survive another term, just to postpone the elections a little longer.

The longer he succeeds in delaying the next elections, the more likely it is that military action—perhaps not even an essential one—will take place. The public will already be knee-deep in existential anxiety in the face of mounting threats made by Hamas, leaving no room for a political solution other than an exceptional military strike.

It has become a new Israeli tradition: on the eve of elections, or when discussions on the next year's budget are looming, Israel's security situation suddenly becomes exceedingly problematic. After the elections, the threats subside, and our leaders sing the praises of Israel's strategic situation—which, of course, has never been better.

The truth is, over the past week, since Lieberman left office, no new nuclear reactor has been discovered in Syria that would necessitate forming an emergency government and launching a dramatic military operation.

The only dramatic move on this front is our deepening clash with the Russians. Russian President Vladimir Putin has officially announced he would not meet with Netanyahu. This has immediate implications to the IAF's freedom of operations in Syria. Any Israeli action today, certainly one that cannot be denied, will be perceived by the Russians as contrarian.

Gaza, on the other hand, is a much more convenient ground for military action, as it meets Netanyahu's definition of an "ongoing campaign." That was the rationale he used: toppling the government at such a complex time for national security is "irresponsible," since "in the midst of battle, we don't play politics."

One can find some solace in two curbing factors: first, Netanyahu has never been seen as one with an adventurous spirit, and in most cases, he accepted experts' recommendations. Secondly, IDF Chief of Staff Gadi Eisenkot, who will be finishing his term in less than two months, is not changing his tune. In this day and age, the army is the responsible adult and the main uniting stately body.

But, just to be on the safe side, so we could all remain calm, it would be better to hold the next election as soon as possible, before Netanyahu's word, hints, and intimidation become a reality that we might regret.