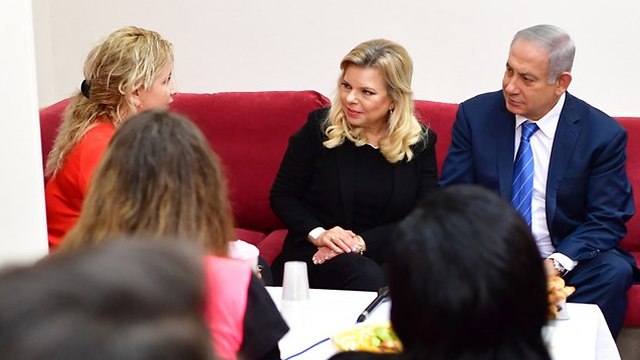 During visit to women's shelter, Netanyahu asked why the coalition voted down bill to combat violence against women, responding it was because the legislation was proposed by the opposition; his wife Sara Netanyahu noted, 'there is no opposition and coalition in these matters,' prompting Zionist Union MKs to demand another vote.

Prime Minister Benjamin Netanyahu agreed Sunday to support an opposition bill proposal to establish a parliamentary committee of inquiry into violence against women after he was reminded by his wife that he had voted against it.

During a visit to a women's shelter in Jerusalem, the prime minster was asked why the coalition voted last week against the bill proposal by Zionist Union MKs Stav Shafir and Yael Cohen Paran.

"Because this was the opposition's proposal," Netanyahu responded.

The prime minister's wife, Sara Netanyahu, who accompanied him on the visit, noted that "This shouldn't be a coalition and an opposition dispute. It's a universal issue."

Consequently, the opposition MKs re-submitted their proposal to the Knesset Speaker Yuli Edelstein, demanding a prompt re-vote on the issue.

"This phenomenon has claimed many victims, and yet, for years now, despite the establishment of a ministerial committee on the issue, domestic violence has not been dealt with properly," Shafir and Cohen Paran said in a statement. "Last week, a proposal to establish a parliamentary committee of inquiry into the murder of women was presented to the Knesset and was rejected by a narrow majority."

"This morning we heard Netanyahu say that he is unaware of such a proposal, even though he himself voted against it only last week," the two MKs added. "In the same breath, the prime minister said that domestic violence must be taken seriously, and that a special committee should be established. Since the prime minister changed his mind, we can assume that when we re-submit our proposal, Netanyahu will exert his power and allow coalition members to vote for it...Sir, every day that passes may add more victims the violence statistics."

The prime minister and his wife visited the women's shelter to mark this year's International Day for the Elimination of Violence Against Women. During the visit, they spoke with the shelter's residents, listened to their stories, and offered their support. Netanyahu said that domestic violence must be dealt with severely and added that he intends to take up the issue together with the Cabinet.

"Violence against women is an abhorrent phenomenon. It is a crime… I discovered that we are hardly doing anything against those who are responsible for this crime…This is terrorism in every respect," the prime minister said.

At the Cabinet meeting, Netanyahu announced his intention to form a ministerial committee on domestic violence. The committee will be headed by Netanyahu himself and include Minister of Justice Ayelet Shaked, Welfare and Labor Minister Haim Katz, Minister of Public Security Gilad Erdan and the Social Equality Minister Gila Gamliel.

Meanwhile, hundreds of people took part in the annual protest rally against domestic violence in Tel Aviv on Sunday evening.The protesters marched from Rabin Square towards the city's Cinematheque Square and shouted, "the culture of rape begins inside the government," among other things.