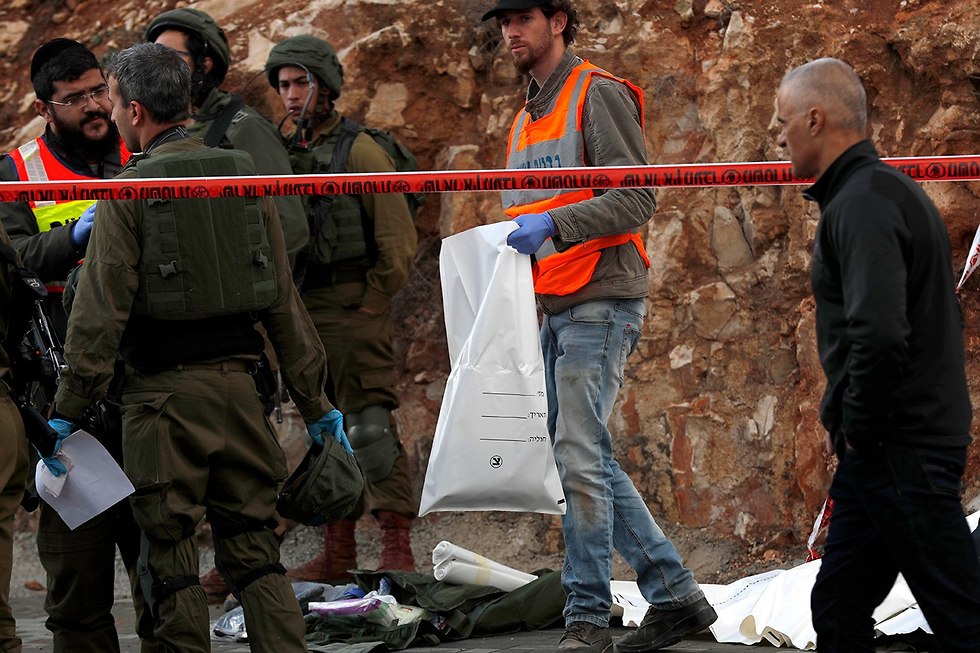 A Haredi battalion in the eye of the storm

The Netzah Yehuda battalion is reeling from 3 attacks in 5 days, during which two of its fighters were slain, but the recent violence is not the only challenge facing this unique group of soldiers.

Soldiers from the IDF's elite Duvdevan unit and those from the ultra-Orthodox Netzah Yehuda battalion looked practically identical as they stood shoulder to shoulder at a falafel stand close to both the settlement of Beit El and the Palestinian refugee camp of Jalazone last Thursday.

But while the Duvdevan fighters are being deployed north to find and destroy Hezbollah tunnels along the Israel-Lebanon border, the Netzah Yehuda battalion, part of the Kfir Brigade, is tasked with mundane routine security measures in the area north of Ramallah.

But everything changed last week. The soldiers of Netzah Yehuda sustained three attacks in five days, during which two of its fighters were killed on duty. For the beleaguered battalion, it was the latest crisis in a series of incidents that has raised red flags in the army brass.

The scene of an attack in the West Bank that killed two Netzah Yehuda soldiers. (Photo: EPA) (צילום: EPA)

Sergeant Yosef Cohen, aged 19 from Beit Shemesh, and 20-year-old Staff Sergeant Yovel Moryosef from Ashkelon were killed when a gunman leaped out of his vehicle and opened fire as the two stood at a bus stop close to the West Bank outpost of Giv'at Asaf. Another soldier was critically wounded. A day later, a 21-year-old member of the Netzah Yehuda battalion was seriously wounded when a Palestinian stabbed him and struck him on the head with a rock at a military post on the outskirts of Beit El.

On Saturday, Border Police officers clashed with two Netzah Yehuda soldiers who reportedly came to support a protest by residents of the Beit El area over the surge in violence in the West Bank.

The IDF has yet to comment on the incident, while the soldiers are still being questioned. Those close to the two soldiers say they are frustrated by the violent events of the past week.

The mission given to the commander of the Netzah Yehuda battalion, Lt. Col. Nitai Okashi, is to restore calm in the area, deter further terror attacks and capture any fugitive terrorists.

But it appears that his hardest tasks are still ahead—to move his battalion past the recent events, as his soldiers mourn the loss of two comrades, and to overcome the spate of operational difficulties that Netzah Yehuda has faced.

Relocating the Kfir Brigade headquarters to the area may not only help Okashi to fulfill the battalion's mission, but could also support him and his commanders during the most difficult time Netzah Yehuda has experienced since it was established 19 years ago.

Netzah Yehuda's fighters have proven that they can be trusted with the simmering West Bank. However, a series of grave incidents have occurred over the past two years on its watch.

According to the IDF, from March to August, the battalion carried out 83 arrests, 19 searches to locate weapons, and 19 interrogations of terror operatives in the Ramallah area. In addition, it carried out dozens of seizures of funds earmarked for terrorism.

But Netzah Yehuda fighters have also been accused of beating and severe abuse of Palestinians, including electrocuting them while in custody.

Furthermore, members of the battalion were disciplined for interfering with a Palestinian journalist as she was reporting from the field, allowing participants in the so-called "wedding of hate" to use their weapons, and pointing a firearm at an Israeli Arab man in the Old City of Jerusalem.

Most of these incidents only involved a handful of Netzah Yehuda soldiers, but are still a sign of an alarming trend.

The most serious incident was the 2017 terror attack in the West Bank settlement of Halamish, in which three family members were murdered by a terrorist while an entire Netzah Yehuda company was stationed there.

The inability to prevent the attack triggered harsh criticism, and the battalion's performance before, during and after the attack was defined by senior officers in the Central Command as a "failure."

"The soldiers are infused with patriotic spirit and seek to prove themselves, but they also experience hard moments when the IDF values collide with the soldiers' ultra-Orthodox values on which they were raised," the officer said.

"The battalion is comprised of soldiers from different backgrounds, and it is a mistake to call it an ultra-Orthodox battalion. Religious immigrants from France with a wealthy background as well as teens, who were kicked out from their yeshivas at the age of 15, and those who identify with the (radical settler) Hilltop Youth serve in the battalion," he said.

He added that despite the different backgrounds, the Netzah Yehuda fighters are united and motivated to do their job in the best way possible. This includes taking on the most demanding tasks in their sector—guarding hitchhiking stops, conducting routine patrols, carrying out stake outs in the blistering cold, and maintaining order at checkpoints.

"They don’t have Gaza. They know the chances of taking part in the fighting in Lebanon are slim, and they are left with these grueling tasks in the territories," he said.

Meanwhile, the IDF intends to bolster the battalion, which over the past two decades has become a symbol of integrating ultra-Orthodox soldiers into the army.

Half of the battalion's fighters receive official and unofficial financial aid from the army, and dozens of its soldiers are defined as lone soldiers, after they were denounced by their families for enlisting. There is strong opposition among many members of the ultra-Orthodox community to military service, and efforts to legislate for compulsory national service have been fiercely opposed.

"This is an important project on a national level, this is not another battalion that makes mistakes and must be reprimanded," another officer said.

"The battalion's soldiers who concluded their service, have integrated into the workforce, gained an education and now serve in the Haredi reserve battalion. Only a wise commander will be able to pull out the battalion of its current crisis," he said.