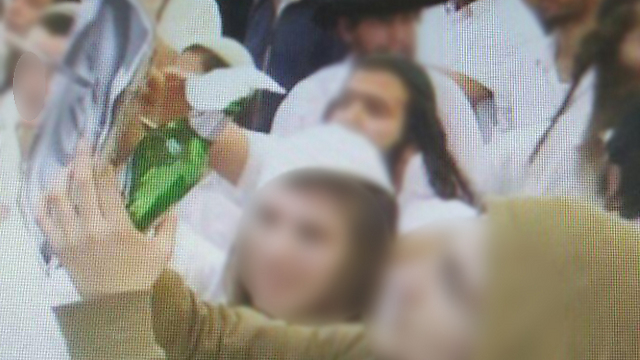 Relatives point to contact between security service coordinator and father of groom as evidence that Shin Bet was present at event but neglected to stop incitement.

The family of Shahar Eshbal, the groom whose wedding became a radical right-wing demonstration of hatred, said Monday that the Shin Bet was aware of the event and neglected to prevent incitement.

Relatives pointed to correspondence between the groom's father and a Shin Bet coordinator in which the latter offered his congratulations ahead of the wedding. "It's unclear why the Shin Bet didn't stop the frenzy as it happened," said a source close to the family.

Arrests are believed to be imminent in the case of the wedding, captured on video, in which young guests celebrated with Molotov cocktails, weapons, and a picture of slain Palestinian infant Ali Dawabsheh pierced with a knife.

In the wake of the public release of the videos, people close to the families involved asserted that the police and Shin Bet had prior knowledge of the wedding. They claimed messages between the groom's father and a Shin Bet coordinator proved this and suggested that events were manipulated by someone with certain interests.

In correspondence, the coordinator congratulated the father, who responded: "Thank you very much. I'm sure we'll see each other at the event, if I manage to recognize you. Just please don't come with the ski mask, so people don't get afraid – there are elderly people there."

Meanwhile, rumors have spread in the past days that some wedding guests were unknown to the families and that these brought pictures of the Dawabsheh infant. The Eshbal family also declared that Shin Bet operatives visited families of those involved multiple times before the wedding.

The Shin Bet said in response that it occasionally contacts relatives of individuals suspected of radical, violent activity in the hopes of de-radicalizing the suspect.