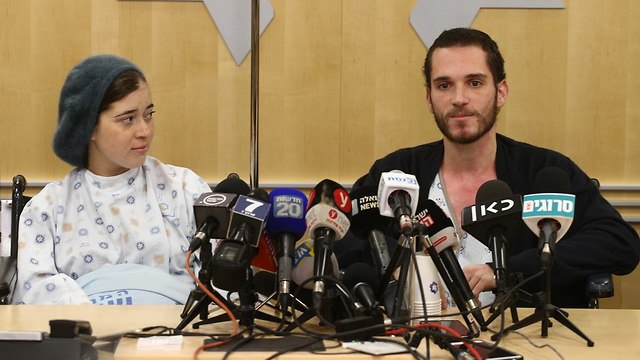 'Our enemies may kill our children, but they won't break us'

Speaking at a press conference, Shira and Amichai Ish-Ran, parents of premature-born infant, who succumbed to his wounds on Wednesday, say their son succeeded in uniting the Jewish nation.

Shira and Amichai Ish-Ran, parents of the infant who was born prematurely after his mother was wounded in a terror attack near the settlement of Ofra last week, told reporters on Sunday that, “Our enemies can kill our children but they won't break us."

Speaking at a press conference at the Sha'arei Tzedek Medical Center in Jerusalem, Shira and Amichai thanked the medical personnel who fought for days to save their son's life.

Shira and Amichai Ish-Ran (Photo: Ohad Zwigenberg)
"During the three days our baby lived, he united us —secular, religious, ultra-Orthodox, right and left wing, who came to support us. I'm proud to be part of this nation," Amichai said.

"Our enemies can shoot at us, stab us, run over us, and hurl stones at us. They can murder us and our children, but they cannot break us. We won't let them," he asserted.

Shira echoed his sentiments, adding, "I had lost a lot of blood and received many blood donations. The blood of the people of Israel is flowing through my veins right now. "I feel that the Jewish nation is supporting me and strengthening me in every step of the way," she added. "The paramedic sitting next to me was the one who prevented me from losing consciousness on the way to the hospital. As Amichai said, we remember everything that happened. I was conscious up to the moment I went into surgery," Shira said.

Doctor Alon Schwartz, senior surgeon at Shaare Zedek Medical Center, said, "Shira is no longer in a life-threatening danger. However, her rehabilitation process will be long. She was mainly wounded in her lower limbs, which will require a lot of operations and physical therapy."

Doctor Alon Schwartz (Photo: Eli Mendelbaum)
Schwartz added that Shira maintains a positive attitude and that the medical staff expects her injuries will not prevent her from having children in the future.

Shira, who was 30 weeks pregnant, was severely wounded in the terror attack near the Ofra junction. She underwent an emergency surgery, during which her baby was delivered in emergency Caesarean section.

Shira Ish-Ran (צילום: אוהד צויגנברג)
On Tuesday, Shira and Amichai saw each other for the first time since the attack. On Wednesday, the couple visited their son for the first time at the hospital's ICU. Later that day, the infant succumbed to his wounds and was laid to rest after being named Amiad Israel, while his parents remained in the hospital. Apart from Shira and Amichai, five other people were wounded in the terror attack —one moderately and four lightly. Footage of the drive-by shooting scene shows that gunfire was sprayed at Israeli civilians who were taking part in a candle-lighting ceremony in memory of a car accident victim at a bus station near the Ofra junction. IDF troops who were nearby responded by firing towards the vehicle, which fled the scene. During an operation near Ramallah on Wednesday night, the Border Police counter terrorism unit, Yamam, killed a Palestinian suspected of involvement in the shooting attack.

Saleh Barghouti
The unit shot at a taxi in the West Bank town of Surda, north of Ramallah; another passenger was injured and was taken to a hospital in Jerusalem. The two men who were shot, Saleh and Awad Barghouti, are both members of the large Barghouti clan from the Ramallah region. Security forces also arrested a number of Palestinian residents of the town of Silwad for suspected involvement in the terror attack. Forces also surrounded a house in Ramallah, not far from the Muqata, the Palestinian government complex, and the inhabitants were taken for questioning by the Shin Bet security service.