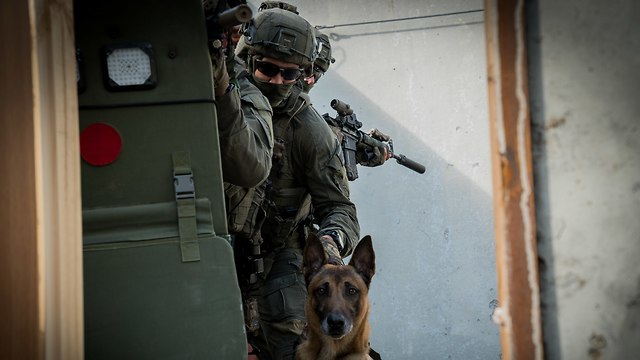 Rambo — the police dog who captured a terrorist

The canine cop was wounded in the line of duty when he was sent into a house in Nablus where Ashraf Na'alwa, who murdered two Israeli coworkers, was hiding.

The canine cop was behind the successful operation to take down Ashraf Na'alwa, the terrorist who killed two Israeli coworkers in the Barkan shooting attack in October.

After hunting the terrorist for months, Yamam, the Israel Police counter-terrorism unit, received concrete intelligence some two weeks ago about the terrorist's hideout in the Askar refugee camp in the West Bank city of Nablus.

Rambo was immediately sent in to search the property. "We reached the house... and I ordered Rambo to search inside," said A., the sergeant major of command who is Rambo's handler. "We heard gunshots a few seconds later and in that moment I realized that we had found the terrorist, and believed that Rambo was not coming back."

"But then I suddenly saw Rambo coming out of the house and walking toward me…he had a gunshot wound to his neck and shrapnel all over his body. With the help of Yamam paramedics, I evacuated Rambo to the Veterinary Teaching Hospital in Beit Dagan. I was so happy he was alive, although my thoughts were still with my comrades I had left behind."

Na'alwa was killed by the officers after a short exchange of fire. Except for Rambo, there were no injuries among the Israeli forces.

Rambo and his comrades (Photo: Courtesy)

The IDF said catching the terrorist proved to be a challenge. "We were very close a few times and we narrowly missed him —he made almost no mistakes," an IDF source said. "He had a lot of luck, and we believe he acted as a lone wolf."

After the terrorist was shot, it became clear that the weapon he used to shoot Rambo with, was the same one he used to kill Kim Levengrond Yehezkel, 28, and Ziv Hagbi, 35, in the West Bank shooting attack.

"Thanks to Rambo, the terrorist was found and fighters' lives were saved," A. said.

Rambo is beginning a long rehabilitation process, but his brothers in arms hope he will soon return to full operational activity.