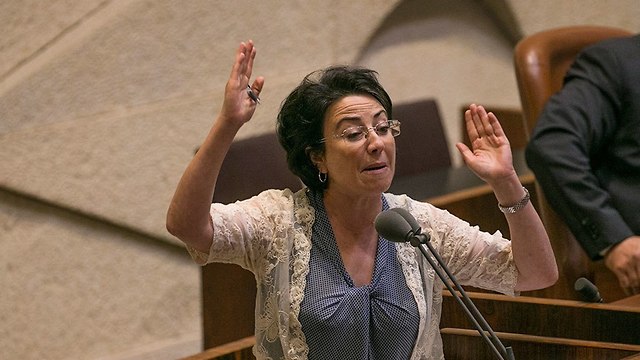 Flotillas and fights: Israel's most controversial MK leaves behind a contentious legacy

Hanin Zoabi was the first Arab woman to become an MK for an Arab party, and the Joint List lawmaker spent her decade in parliament stirring up controversy, joining the Gaza flotilla, calling IDF soldiers murderers, praising terrorists who carried out deadly attacks on Israelis.

The next time the Israeli parliament meets, after the April 9 elections, it will be without one of its most controversial politicians. Arab Israeli lawmaker Hanin Zoabi of the Joint List MK announced last week that she will not be seeking reelection, and she leaves behind a legacy of controversy, unfiltered, provocative opinions and the occasional violent outburst.

Throughout her 10-year Knesset career, Zoabi’s speeches and actions provided a host of sensational headlines, sparking a commotion during a plenum session on more than one occasion with her outrageous statements.

She joined the Balad party back in 1997, and a decade later was placed third on the faction Knesset list. In 2009, at the age of 49, Hanin Zoabi became the first Arab woman to be elected to parliament for an Arab political party.

Over the years, Zoabi also become very well-known to the members of the Knesset Ethics Committee, not only due to the multiple suspensions she received, but also because of her own complaints against other MKs and ministers.

Zoabi's biggest controversy remains the 2010 Gaza flotilla incident. She was on board the Mavi Marmara ship—part of the six-strong Gaza Freedom Flotilla—lwhen it set out from Turkey to Gaza in May 2010, despite the maritime blockade imposed by Israel. The Israeli naval commandos who stormed the ship outside Israeli territorial waters faced violent resistance, and the ensuing battle ended with the death of nine of the passengers.

Zoabi documented the events onboard, later called the IDF soldiers “murderers” and went on the offensive when asked to apologize. "The person who murdered is the one who needs to apologize. You need to apologize," she retorted.

Following the incident, Zoabi was labeled a “traitor” and a “terrorist” by multiple MKs, and an investigative committee headed by former Supreme Court justice Ya'akov Turkel established that the activists on board of the ship attacked the IDF soldiers with weapons, which could have “caused death or serious injury.” She was initially disqualified from the general elections following the Mavi Marmara debacle, but the Supreme Court unanimously overruled the decision by the Central Elections Committee.

Zoabi was just as controversial in the plenum as she was on an anti-Israel mission. During one Knesset session, Likud lawmaker Miri Regev addressed her in Arabic, telling her to “Go back to Gaza.” In a 2011 parliamentary debate, President Reuven Rivlin, who was serving as Knesset speaker at the time, ordered Zoabi to be removed from the parliament. The lawmaker had to be forcefully ejected by Knesset ushers, whom she violently attacked.

Zoabi protests killing of protesters on the Gaza border

Four years later, during the Gaza war of 2014, know in Israel as Operation Protective Edge, Zoabi verbally and physically assaulted policemen at an anti-war demonstration in the city of Haifa. The event prompted the Ethics Committee to impose a maximum punishment on the Joint List MK, suspending her from parliament for six months.

In February 2016, Zoabi and Balad colleagues Jamal Zahalka and Basel Ghattas caused a major uproar after they met family members of terrorists who perpetrated deadly attacks against Israelis. The meeting, during which the three observed a minute of silence, was part of the Arab MKs’ campaign to pressure Israel into releasing the bodies of those attackers they claimed were "shaheeds" (martyrs).

As recently as April 2018, the Arab MK called on the Palestinians in the West Bank to join the Hamas-led "March of Return" protests on the Gaza border, and demanded an Israeli investigation into the shooting of demonstrators during violent border clashes with the IDF.

"We need millions of Palestinians to march on Jerusalem. That is the aspiration. But we can't do it, because the Israelis would kill them," she said. "Israel has turned from a racist country to a fascist one."