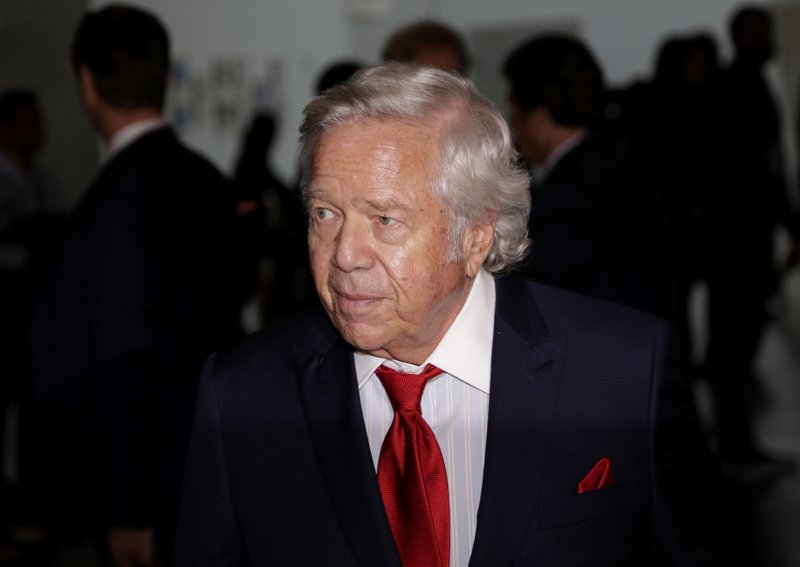 After last year's winner Natalie Portman refused to accept the Genesis Prize over Netanyahu's policies, this year's "Jewish Nobel” goes to an outspoken supporter of the Jewish state.

New England Patriots owner Robert Kraft has been awarded Israel’s 2019 Genesis Prize in recognition of his philanthropy and commitment to combating anti-Semitism, organizers of the prize announced on Wednesday.

The $1 million award, widely known as the “Jewish Nobel” prize, is granted each year to a person recognized as an inspiration to the next generation of Jews through professional achievement and commitment to Jewish values.

New England Patriots owner Robert Kraft
Kraft, who grew up in an observant Jewish home, has been an outspoken supporter of Israel and has arranged trips for NFL Hall of Famers to the Holy Land. His prize money will be donated to initiatives combating anti-Semitism, other forms of prejudices and what some portray as attempts to delegitimize Israel.

“I am honored to receive the Genesis Prize and thank the Genesis Prize Foundation for its recognition and willingness to direct my prize money to such worthy causes,” said Kraft. “It is important that we continue to support organizations that focus on combating prejudices by building bridges and uniting people of different backgrounds.”

Prime Minister Benjamin Netanyahu is expected to present Kraft the award in Jerusalem in June.

Last year’s winner, Natalie Portman, snubbed the event because she did not want to appear to be endorsing Netanyahu. The decision sparked an angry backlash from some Israeli politicians with others warning that her move was a distressing sign of eroding support for Israel among young American Jews. The saga was troubling for the Genesis Prize Foundation, which says it works hard to prevent its philanthropy from being politicized.

There seems to be no such worry of a repeat snub from Kraft. The 77-year-old billionaire from Brookline, Massachusetts, is a longtime supporter of Israel, has donated to various causes there and is close to Netanyahu. Though a Democrat, he is also friendly with US President Donald Trump.

“Kraft has spent most of his life advocating for a more just society, tolerance and inclusiveness. He is one of the world’s most generous philanthropists whose charitable giving reflects the Jewish value of tikkun olam — repairing the world,” said Stan Polovets, co-Founder and Chairman of The Genesis Prize Foundation.

“Our foundation looks forward to working with Robert and leveraging the power of sports to combat anti-Semitism and other forms of hate and prejudice,” he said.

Kraft is the founder, chairman and CEO of the Kraft Group, the holding company of the Kraft family’s diversified portfolio of businesses, which includes one of the largest privately-owned paper and packaging conglomerates in the world. He derives his fame, however, from owning the five-time Super Bowl champion Patriots, one of the most successful franchises in American sports.

He’s also primarily responsible for the growth of American football in Israel in recent years. He’s sponsored the sport since it was launched in 1999, and there are now more than 2,000 active players on more than 80 teams playing at various levels.

In 2017, he dedicated the Kraft Sports Complex in Jerusalem that includes Israel’s first full-sized football field. The visit coincided with his second mission to bring Pro Football Hall of Fame players to Israel, where the game has resonated with native-born Israelis who have taken a liking to the army-like strategy, camaraderie and collisions. The trip included Joe Montana, Jim Brown, Roger Staubach, Mike Singletary and other legendary former players. Tom Brady and other Patriots stars have also visited over the years.

Kraft also owns the New England Revolution of Major League Soccer. As part of the efforts for which he is being rewarded, the team will be hosting FC Chelsea at Gillette Stadium in May as part of the “Say no to anti-Semitism” campaign.

The Genesis Prize was inaugurated in 2014 and is run in a partnership between the Israeli prime minister’s office, the private Genesis Prize Foundation and the chairman’s office of the Jewish Agency, a nonprofit group with close ties to the Israeli government. It is funded by a $100 million endowment established by the foundation.