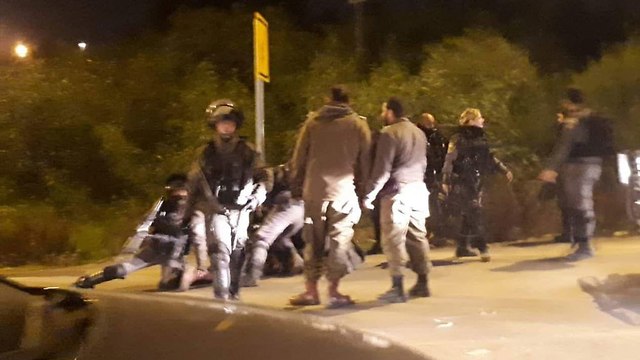 Military police arrest 5 members of Netzah Yehuda battalion on suspicion of assaulting two detainees; this is not the first time troubled battalion has been involved in violent incidents, as last month soldiers fought with Border Policemen in an effort to free settlers.

The soldiers were to be brought before a military court Thursday for their remand hearing.

About a month ago, two soldiers from the ultra-Orthodox Netzah Yehuda battalion tried to free three settlers who were in custody for throwing stones at Palestinians. As a result, a rare clash broke out between the soldiers and the Border Police forces who arrested the settlers.

The two servicemen were suspended from their positions pending a joint investigation of the incident by the IDF and Border Police.

In the past couple of years the religious battalion was involved in a number of violent incidents.

Among others, members of the battalion were disciplined for interfering with a Palestinian journalist as she was reporting from the field, allowing participants in the so-called "wedding of hate" to use their weapons, and pointing a firearm at an Israeli Arab man in the Old City of Jerusalem.

Although most of these incidents involved only a handful of Netzah Yehuda soldiers, they still point to an alarming trend.