Carmel Mauda with children at her former nursery 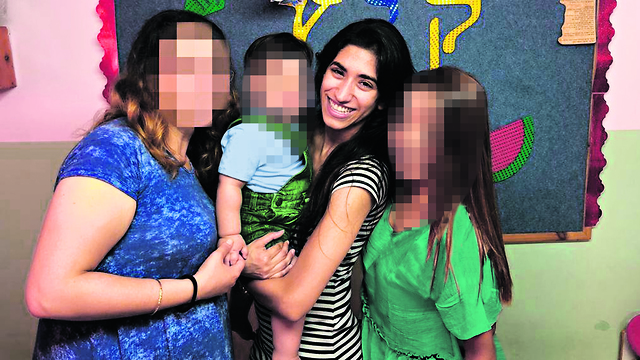 The parents of the victims shout 'life in prison' as the hearing is halted in order to calm the enraged relatives who'd seen their children horrifically abused at the nursery run by Carmel Mauda, who was arrested after discovery of surveillance footage

The kindergarten teacher, charged last month with 18 counts of toddler abuse, will remain in custody until the end of her trial, a judge ruled Wednesday.

Carmel Mauda, 25, who owned a private nursery “Baby Love” in the central city of Rosh Haayin, was arrested in June on suspicion of child abuse after police obtained footage of her spanking children with towels, forcing them up against the wall for hours on end, strapping them to chairs and feeding them their own vomit.

Carmel Mauda with children at her former nursery

Mauda arrived at the Lod District Court on Wednesday morning for a hearing in the case. The enraged parents of the mistreated children began shouting abuse at the 25-year-old and demanded the former nursery teacher be sentenced to a life in prison.

Judge Hagai Tarsi could not continue the hearing and had to leave the courtroom at some point as the parents kept shouting “life in prison” at the defendant. The proceedings resumed once the atmosphere in the courtroom calmed down.

"This is a young woman whose conduct over the years appears to have been normal, but she has been charged with a very serious crime,” said the judge. “An 18-count indictment describing a series of grave abuses. She has systematically harmed the toddlers without having a semblance of humanity."

Once the judge ruled Mauda will remain in custody, the courtroom erupted with the cries of joy from the devastated parents, who began cheering and applauding the decision.

Angry parents at the entrance to Lod District Court

A representative from the prosecution, that recommended the former nursery teacher remain in custody until the end of the trial, called the case “exceptional in its severity.”

“This case has a large number of victims against whom very serious crimes have been committed. We believe releasing her poses a risk not only to minors but to other people as well," the prosecutor said in a statement.

"The arrest report was meant to appease public anger and carry out the Town Square Trial,” said Mauda’s lawyer, Efraim Damri. "The defendant understands the pain felt by the parents and regrets her actions."

Mauda’s home - where the nursery was run - has been burned down at the beginning of July in what appears to have been an arson attack.

The police arrested an 18-year-old man from the West Bank on suspicion of setting fire to the 25-year-old’s property.