A dear friend of mine who is in his 40s recently suffered from stomach aches and lack of appetite. Initially he ignored his loved ones' pleas to have a doctor examine him. Everything is fine, he said, don't worry. Eventually he agreed to the examination, and a cancerous tumor was found in his stomach. He was operated on two days later. During the surgery, part of his stomach, as well as his gullet, was removed. Today, a year-and-a-half after the surgery, he is doing well, and it seems he has beaten the disease.

The story of my dear country, which is in its 60s, is quite different. It also has cancer – the most dangerous kind. Half of its citizens sense this, and the world's nations are well-aware of this, but the country itself ignores the disease. Its leaders claim there is no need for tests and biopsies, and there is certainly no need for surgery. It is painful and dangerous, and during the grueling follow-up treatment the patient loses a lot of weight and sinks into depression. But the patient can get by fairly well without the parts that are removed during surgery, and the main advantage is that following such an operation, if it is performed well and on time, the cancer will be defeated.
West Bank
Biblical claim to the land?
David Ha'ivri
Op-ed: Media telling people that only religious fanatics believe West Bank is part of Israel
Biblical claim to the land?
The cancerous occupation began spreading within us 45 years ago. Professor Yeshayahu Leibowitz and Uri Avneri were among the few who detected the disease when it first appeared. Over the years many people expressed concern and cried out. It was clear that the country was ailing, but it continued to chain-smoke, consume cholesterol in limitless quantities and gain weight with the help of the US' generosity. Let us ignore the disease's history and the role the Palestinians played in its development. When you have cancer, it doesn’t matter who's to blame or whose god offered what to whom. Any person with eyes in his head knows that the region's troubles are related to the occupation – directly or indirectly – like the various illnesses associated with cancer. The prices of cottage cheese and housing are rising, the civil inequality is intolerable and xenophobia is growing. But the worst part is that Israeli society has become racist, violent and horrifically arrogant. 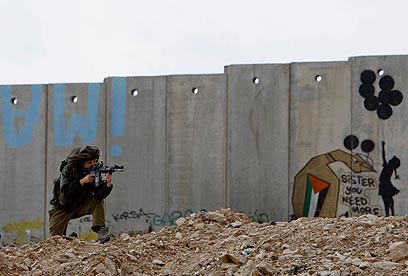 Those who want to see first hand what the occupation is doing to us are welcome to visit villages where the fence detaches families from their agricultural fields – the source of their livelihood; or visit the checkpoints where Palestinian women and children are humiliated; or their neighborhoods, where yeshivas and new settlements pop up every other day. The education our children are receiving is based on this routine.

Israel, which is insisting on living with this cancer, will eventually bring upon itself more than just reprimands. With time, it will be boycotted by the nations of the world, including the US. If we refuse to undergo life-saving surgery, the US will have to cut off the supply of economic oxygen. Let's see how we do then.

It is with great pain that I say "Do not rejoice when your enemy falls, and do not let your heart be glad when he stumbles (Proverbs 24:17)." Bennett, Netanyahu, Feiglin and Lieberman are my true enemies. They are working rigorously as a group against saving this country from its near terminal disease. It's as simple as that. They are staunchly opposed to having the country undergo the necessary surgery to remove the cancerous tumor and continue to nurture secondary cancerous growths on every hill.

Our leaders are trying to repress the symptoms by force, but are refusing to allow the country to receive the only treatment that can save it. By doing so, they are condemning Israel to a terrible fate. Things will only get worse if they are crowned once again in the next elections. Those who vote for them should know they are lending a hand to the country's gradual yet inevitable demise. Professor David Harel of the Weizmann Institute of Science is an Israel Prize and Emet Prize laureate. He is a member of the Israel Academy of Sciences and Humanities