Special report: How Syria's Islamists govern with guile and guns

Journalists' 10-day visit to rebel-held Syria indicates alliances of Islamist brigades are filling the vacuum in areas where Assad's army has withdrawn; billboards put up by Jabhat al-Nusra show figure in full veil and tell women 'you are like a pearl in your chastity'

The Syrian boys looked edgy and awkward. Three months ago their town, the eastern desert city of Raqqa, had fallen to rebel fighters trying to overthrow President Bashar Assad's government. Now the four boys - clad in tight jeans and bright T-shirts - were whitewashing a wall to prepare it for revolutionary graffiti.

"We'll make this painting about the role of children in the revolution," one of the boys told two journalists.

A white Mitsubishi pulled up and a man in camouflage trousers and a black balaclava jumped out and demanded that the journalists identify themselves. He was from the Islamic State of Iraq, he said, the Iraqi wing of al-Qaeda linked to an Islamist group fighting in Syria called Jabhat al-Nusra.

The boys kept quiet until the man pulled away, and then started talking about how life has changed in the city of around 250,000 people since the Islamists planted their flag at the former governor's nearby offices. "They want an Islamic state, but most of us want a civilian state," the boy said. "We're afraid they're going to try to rule by force. " As he finished his sentence, the same white car roared back round the corner. This time two men, both in balaclavas and holding Kalashnikov assault rifles, stepped out. "Painting is forbidden here," one fighter said. The graffiti was too close to the group's headquarters. One of the boys made a brief, almost inaudible protest. 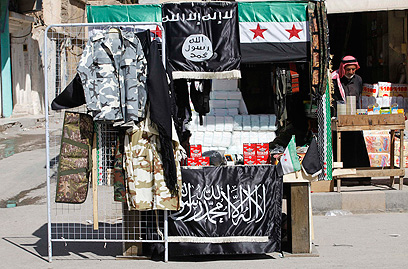 "We're sorry," the fighter said. "But painting is forbidden." His comrade stroked his long beard and said: "We are not terrorists. Don't be afraid of us. Bashar is the terrorist."

The encounter captures an important shift underway in rebel-held Syria. Using a mix of intimidation and organization, alliances of Islamist brigades are filling the vacuum in areas where Assad's army has withdrawn and more secular rebels have failed to provide order, a 10-day visit to rebel-held Syria by Reuters journalists showed. The Islamist groups include al-Qaeda affiliates and more moderate partners, so the nature of their rule is complex. They administer utilities, run bakeries and, in a town near Raqqa, operate a hydroelectric dam. They are also setting up courts and imposing punishments on those judged transgressors. The United States and other Western powers support the Syrian National Coalition, a group of opposition figures based in Cairo. But the coalition has very little influence on the ground in Syria, so locals are increasingly turning to the Islamists as their best alternative to chaos.

US and European security officials say Jabhat al-Nusra is being financed by wealthy families from Saudi Arabia and Qatar. Syrian Islamist rebels say foreign fighters bring in money and that Syrian expats and Gulf-based individuals who want to overthrow Assad are helping them. Members of Ahrar al-Sham, which has fewer foreign fighters than Jabhat al-Nusra, told Reuters that they make money through business ventures and by taking over banks. 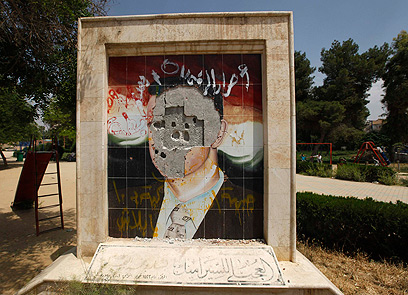 'They defend us, and we defend them,' Raqqa (Photo: Reuters)

So far the Islamists have won sympathy from many residents in Raqqa - including those who oppose their vision of a narrow moral code and an Islamic caliphate - with their apparent restraint.

Billboards put up by Jabhat al-Nusra show a figure in full veil and tell women "you are like a pearl in your chastity." Yet unveiled women can still walk openly on Raqqa's streets and one resident said he had no problem getting whiskey, as long as he drank it in private. One evening in June, residents held an exhibit of homemade crafts to raise money for poor families. Men and women mingled as music played over a stereo system. Reema Ajaji, a veiled women who helped organize the event, said the media had unfairly maligned Jabhat al-Nusra. "They're called terrorists, and we don't accept this," she said. "They're our sons. Us and them, we're one thing. They defend us, and we defend them. " 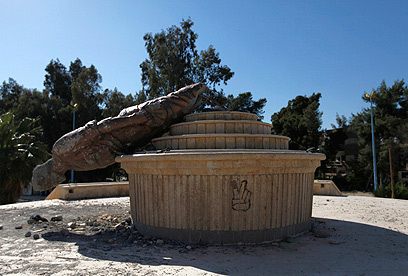 She waved around the room, indicating the women in brightly colored headscarves and dresses, some unveiled. "We dress as we want. Do you see these girls?" she said. "Everyone is free to choose." If Jabhat al-Nusra had wanted to impose their law on people, they would have shut down the exhibition, Ajaji said.

Other residents pointed to the university, which shut for about a month after rebels took the city but is now operating more or less normally. Inside the gated campus, young men and women chatted in the hallways and shared meals in the packed cafeteria. Armed groups are not allowed to enter. Ahmed Jaber, a 22-year-old chemistry student and member of the student union, said some 80% of students were attending classes and exams were going ahead. Life in Raqqa had improved over the past few months, he said, although there were disputes between Islamist brigades and more secular units. "It's in everyone's interests to resolve these differences," Jaber said. After the rebels took Raqqa, some residents held protests to demand a civilian state. Others, siding with Jabhat al-Nusra, called for an Islamic government. But since then, they have agreed to hold protests calling only for Assad's downfall. 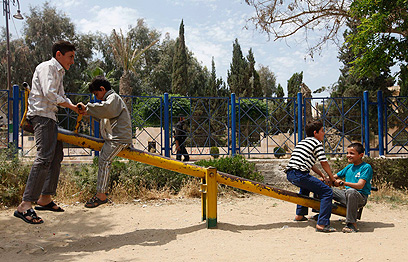 'Don't be afraid of us.' Kids in Raqqa (Photo: Reuters)

"After the hell of the regime, we consider this an excellent situation," Jaber said. "Yes, there's a security vacuum, there's chaos, and sometimes there are disputes. But it's much better than before. "