Elie Wiesel: People are no longer ashamed to be anti-Semites

BOSTON – Prof. Elie Wiesel was supposed to be the keynote speaker at the inauguration ceremony of the new display at the Jewish pavilion in Auschwitz, the place where he was enslaved and lost his loved ones. For personal reasons he was unable to attend the important event, but in honor of International Holocaust Remembrance Day, the author and Nobel Peace Prize laureate told Ynet about the never-ending struggle against anti-Semitism and the recognition that it would likely never be defeated.

The world is still silent

Prof. Wiesel, who coined the eternal expression "Not all victims were Jews, but all Jews were victims," examines every significant occurrence with an overall view of world peace. To the same extent, he meticulously examines whether the memory of the Holocaust has been engraved in people's minds, and whether there is a danger that the events of 1939-1945 will repeat themselves, and the world – as it was during those years – will be indifferent and silent. 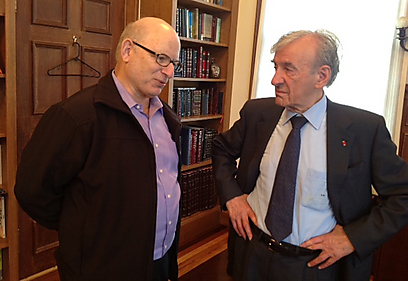 Prof. Elie Wiesel with Dr. Yoel Rappel. 'I thought the memory of the Holocaust would shame those boasting anti-Semitic opinions. I was wrong' (Photo: Dorit Rappel)

"The Holocaust is a unique event, but it has a universal significance which must be memorized incessantly," he says, voicing concerns over the temptation of Iran's nuclear ability and the civil war in Syria, which has already claimed a price of 150,000 deaths. And the world is silent.

The unstoppable conversation between us has been going on for several years now, but the murky wave of anti-Semitism sweeping over the Western world, as well as Eastern Europe (with the recent incidents in Hungary and Ukraine), are fresh and extract statements with despair running through them.

"Unfortunately, anti-Semitism still exists," Wiesel says. "It has been alive for more than 2,000 years, and will likely continue living. I thought that the memory of the Holocaust would shame those boasting anti-Semitic opinions. I was wrong. It still exists in different countries, and it seems people are no longer ashamed to be anti-Semitic."

Wiesel believes that the memory of the Holocaust is the only chance of saving the world from another disaster. He defines the modern anti-Semite, first and foremost, as anti-Israel. "It's very difficult to separate between the two," he says. 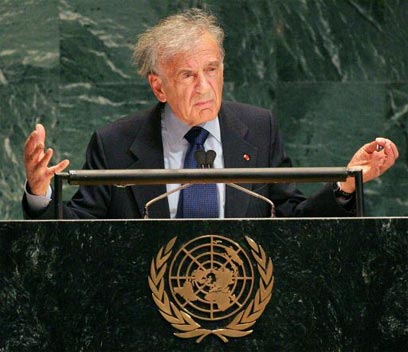 Elie Wiesel. Circumcision and ritual slaughter bans 'stem first of all from ignorance and disregard of the Jewish faith' (Photo: Reuters)

Known as one of the State of Israel's greatest advocates, Wiesel argues that the fundamental problem is the attitude towards Israel and not anti-Semitism.

"It's clear to me that one can't be Jewish without Israel. Religious or non-religious, Zionist or non-Zionist, Ashkenazi or Sephardic – all these will not exist without Israel. The State's existence is the oxygen of the image and ideas of the new anti-Semitism."

Does the public dispute over the circumcision and ritual slaughter bans also stem from anti-Semitism?

"In my opinion, it stems first of all from ignorance and disregard of the Jewish faith. Those who raise such ideas and others will soon come up with the idea to cancel Shabbat, so that Jews will rest on Sunday. It's more of case of ignorance, and it leads to harassment against the foundations of Judaism."

Can the different phenomena experienced recently by the Jewish community in the United States be defined as anti-Semitism?

"There are expressions of anti-Semitism, yet we can't talk about an anti-Semitic movement but about groups of anti-Semites which operate in different places, and we don’t know how many members they have. This reality must also concern us, because it could expand."

The proposal made by Wiesel, who served as chairman of the President's Commission on the Holocaust, was accepted at the time by the American Congress and has become a fixed tradition.

Dr. Yoel Rappel is the director of the Elie Wiesel Archive at Boston University and the editor of Wiesel's books "The Biblical Soul," "The Hasidic Soul" and "The Talmudic Soul," which were published in Hebrew by the Yedioth Books publishing house