The genie in Netanyahu's bottle

Op-ed: The only public issue in the Sara Netanyahu affairs is to what extent her behavior affects the prime minister's decisions and performance; and why is he complaining about a political conspiracy instead of dealing with reality?

On Thursday, Haaretz journalist Amir Oren published his informative revelations about the bottle business at the prime minister's residence. The story was met with different reactions from its readers: Some were furious, others found it hard to believe, some regretted the fact that they had thrown out their own bottles without getting anything in return, some were amazed and some just laughed.

I laughed. I thought about the drivers at the Prime Minister's Residence, loading the trunk of the governmental car with empty bottles, travelling in a secured convoy to the nearby supermarket, and pouring the deposit money – 30 agorot (about 8 cents) per bottle – coin after coin, into the outstretched hand of the wife of the prime minister of the State of Israel. I thought about the needy and homeless picking through the dumpsters outside the Prime Minister's Residence, hoping to find a bottle, but only finding ice cream containers. I thought about the previous series of stories, which implied that the prime minister's wife has a drinking problem, Heaven forbid.

It's possible that she doesn’t even drink the alcohol in the bottles that the employees secretly bring up to her room. She empties the bottles into the sink, and then sends the drivers to the supermarket. The Bible tells the story of Esau, who sold his birthright for a mess of pottage. What would the Bible say about Sara Netanyahu?

Over the weekend, the politicians embraced the bottle. Meretz Chairwoman Zehava Galon demanded a criminal investigation; she berated Attorney General Yehuda Weinstein and State Comptroller Joseph Shapira for allowing the Netanyahus to evade punishment. Zionist Camp leader Tzipi Livni cried out for the poor, whose monthly salary doesn’t come close to the daily expense on alcohol at the prime minister's residence. Until the bottle affair, I had no idea that Livni was a social politician. And the other Zionist Camp leader, Isaac Herzog, raised his voice in the defense of democracy.

The pathos was fake; the preaching was unnecessary. They know that of all the corruption stories on the state's agenda these days, the bottle affair is the most marginal story. Even if Meni Naftali, the former housekeeper at the prime minister's residence, is right, and the sum that disappeared into Mrs. Netanyahu's pocket was three times the sum she eventually returned, it's still a minor issue and free of political context. 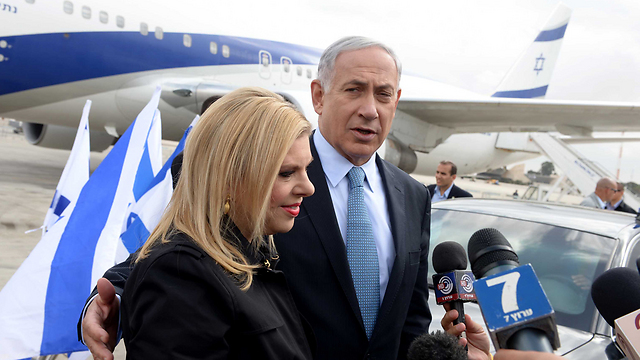 Benjamin and Sara Netanyahu. Why isn't the prime minister coming clean about his wife? (Photo: GPO)

This case, and all the similar stories from the past, has a completely different meaning: Sara Netanyahu is in trouble. She needs help. The attorney general and state comptroller are avoiding investigating affairs related to her not because they have been recruited to her husband's election campaign, but because they don’t know how to deal with such a problem.

What exactly will the state comptroller write in his report, that the inspected person is immature? What will the attorney general order the police to do, place Sara Netanyahu under house arrest? Offer her a plea bargain like the one Ehud Olmert's former bureau chief, Shula Zaken, accepted?

Weinstein and Shapira are doing what most people would do in their situation: They are running from the problem like they would back away from fire.

If there is a public issue here, it should focus on Benjamin Netanyahu: To what extent does his wife's condition affect his decisions, his schedule, his performance? And why is he marketing a misrepresentation to his voters instead of dealing with reality?

Netanyahu could have summoned some people, those who are known as public opinion leaders, legal experts, editors, journalists, and told them: This is the situation; all I am asking is that you show some understanding and keep a low profile. Such an appeal would have immediately taken most of the wind out of the sails of the Sara affairs.

But Netanyahu chose to do things differently. In previous affairs, he hired lawyers who managed to silence the complainants with financial compensation in return for keeping quiet. It was reasonable to assume that the same would happen in the current affair, with the housekeeper.

Only here the plaintiff is not a foreign worker but a tough former elite unit fighter, and his attorney, Naomi Landau, is determined and sophisticated. In the lawsuit filed by Naftali, the defendant isn't Sara but the state. The attorney dealing with the case, Jerusalem District Attorney Liora Havilio, isn't eager to pay. The state will pay in the end, but until then, more affairs and more bottles will float to the surface.

It's all political, Netanyahu complains. It all the result of a dark conspiracy, the protocols of the elders of the left. In an effort to make the bottles disappear, Netanyahu's supporters are going all the way to Barack Obama's White House, no less. One day they explain that the money was paid, and the next day they explain that there was no money – it was the drivers' petty cash. If there was no money, why did you pay? And if there was money, why are you hiding behind the driver?

In short, they messed up. In the film "Leviathan," about the corruption in Vladimir Putin's Russia, a group of men shoots empty bottles. One hits, one misses, and the third pulls out a Kalashnikov and destroys all of them.

"What have you done?" his friend shouts.

"Never mind," he replies, "we have better targets," and pulls out a stack of pictures of politicians.