Swastika on Jewish monument in Denmark
Photo from Facebook

Op-ed: European leaders must follow their words with action and appoint a dedicated EU special envoy on anti-Semitism to effectively take stock of the situation and work out effective strategies to tackle this disease before it escalates any further.

Whilst it is certainly never our intention to be alarmist, the European Jewish Association (EJA) had long warned European governments and heads of European Union institutions that the situation for the Jews in Europe was becoming ever more dangerous and worrying.

We were sadly convinced that last May’s attack on the Jewish Museum of Brussels would not be an isolated incident, and so I am not surprised by the rise of anti-Semitic incidents in Europe’s capitals this year, starting with the attack on Hypercacher in Paris in January, which killed four innocent members of the public, and the attack on the Great Synagogue in Copenhagen a month later, which left one dead.

Politicians at last began to take heed of our calls for increased vigilance and security around the sites of Jewish institutions, schools and synagogues, as the attacks in France and Denmark not only made targets of the Jewish community, but attacked the media, the essence of the free speech so valued by Europeans.

Now those sites are largely guarded and, we hope, secure as a result – as every Jew living in the Europe can expect to feel secure as does every European citizen – but fears for the future of European Jewry inevitably remain. 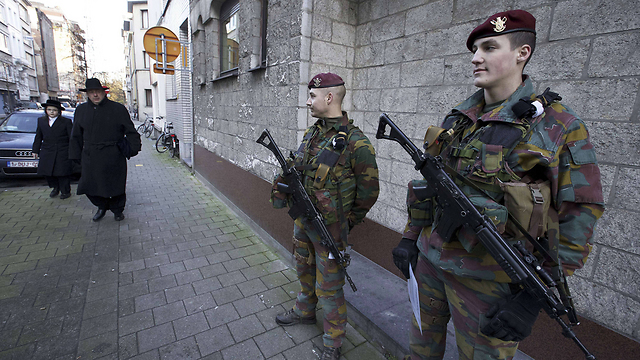 Whilst security is of course essential, of even greater concern to us is the long-term vision for the fight against terrorism and anti-Semitism. Although the commitment of many European governments towards funding and providing security for our institutions is admirable, and we hope it will continue despite the inevitable financial burden of such measures, we believe that the only way to secure the future of European Jewry for generations to come is to drastically increase efforts to counter anti-Semitism.

But security is not the only thing that matters. In the past few months, we have met with European Commissioner for Education Tibor Navracsics, who pledged to promote the issue of education on racism, anti-Semitism and the Holocaust in all schools across EU countries – which is essential in order to eradicate Anti-Semitism from its core.

This is why the EJA launched its campaign to establish an EU Special Envoy to Monitor and Combat Anti-Semitism, which culminated in the official submission of our appeal this week, backed by dozens of members of the European Parliament, to First Vice President of the European Commission Frans Timmermans.

The idea in itself is hardly revolutionary; when you consider that the US has had an envoy for this exact purpose since 2004. The position, currently occupied by Ira Forman who was directly appointed by President Barack Obama, is designed to advance US foreign policy on anti-Semitism and serves as an extension of the US State Department, monitoring human rights practices and religious freedom across the globe. We had the opportunity to host SEAS Forman in our headquarters in Brussels for a discussion and we firmly believe that such a role is ideally suited to the EU, which has to date struggled to assess the scale of the problem of anti-Semitism Europe-wide, as existing EU mechanisms designed to monitor intolerance, such as the Fundamental Rights Agency, rely on cooperation from Member States, many of whom have shown time and time again that don’t have adequate mechanisms in place to themselves accurately monitor levels of anti-Semitism domestically.

What we advocate, therefore, is not simply an envoy to monitor levels of anti-Semitism, which can be addressed by making improvements to existing bodies such as the FRA, but for a position to be created with the scope to work across all EU governments, liaising with all relevant departments – whether Education, Interior, or Justice Ministries – and within national and EU-level administrations, to firstly assess the extent of the problem and to work on strategies and policies to combat the phenomenon.

The first vice-president has already staunchly committed himself to the fight against anti-Semitism, telling invitees at the EJA’s memorial to the victims of the Hypercacher attack in January that "we have the moral duty, a duty of civility, a political duty to bring about the situation as soon as possible that not one Jew in Europe feels the urge to leave Europe because he or she sees no future for them on this continent. Taking away the Jews from Europe is taking away Europe’s soul."

The European Union, he maintained, came into being "to avoid the mistakes we Europeans collectively made in the past." For the European project to survive however, "it will only happen if it is based on the assumption and the acceptance of the fact that for every community that belongs in Europe there is a place in Europe."

The events in Paris and Copenhagen have clearly shown that, although Jewish communities will continue to be the first target for those looking to undermine those fundamental European values of tolerance, respect and the peaceful co-existence of communities, anti-Semitism is only ever the first indication of more wide scale attempts to undermine our common values.

European leaders have voiced their concerns over this escalating disease. We now call on them to follow their words with action – to appoint a dedicated EU special envoy on anti-Semitism to effectively take stock of the situation and work out effective strategies to tackle anti-Semitism before it escalates any further.

Rabbi Menachem Margolin is the general director of the European Jewish Association.