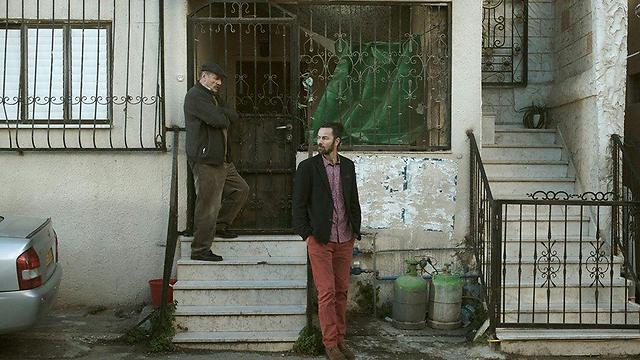 During one of the scenes of the Palestinian family drama in which Mohammad and Saleh Bakri—father and son in real life—play a father and son, the pair are stuck in a Nazareth traffic jam.

As they're sitting in the car, an Arabic-speaking news anchor gives a news reports, which includes updates about the corruption allegations levied against the prime minister and his cohorts relating to former chief of staff Gil Sheffer.

Mohammad Bakri and his son Saleh in the film

In the pre-recorded audio clip, the news anchor can be heard saying "Sara Netanyahu said in response there won't be anything"—a reference to the Israeli ledaers repeated mantra about the investigation: "There won't be anything because there isn't anything" This, perhaps, is Jacir's way of displaying awareness of Israeli domestic discourse, perhaps poking fun at it for the benefit of her international audience.

A clip from Wajib
X

A clip from Wajib

43-year-old Jacir, a Palestinian born in Bethlehem, is renowned for her support for the BDS (Boycott, Divestment and Sanctions movement) cause and has been an active participant in protests against Israeli cinema on the international stage and producers who identify with Israel.

Nevertheless, her directorial début Wajib was filmed in Nazareth and stars Mohammad Bakri and his son Saleh, starring as a father and son going around Nazareth to distribute invitations to the wedding of their daughter/sister, Amal, played by Haifa actress Maria Zriek.

The prime minister's wife is mentioned in fictionalized radio newscast

While Wajib lacks any overt criticism towards Israel and its government's policies, it contains certain motifs hinting at alleged discrimination suffered by its Arab populace.

The film lampoons the affairs pending against the prime minster and his wife
The movie is a Palestinian coproduction with France, Germany, Norway, Qatar and the United Arab Emirates. No Israeli funds were invested in its production, but it was filmed in its entirety in the streets and alleyways of Nazareth. Despite the film being a family-driven drama, it's peppered with veiled allusion to the so-called occupation, most of them humorous. The two leads, father and son in life as well as on-screen, act out their relationship well on the silver screen, contributing to the short film's Oscar nomination.