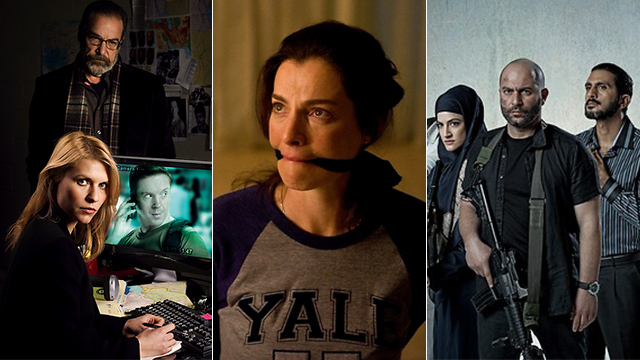 Israeli consul-general in LA Sam Grundwerg and Hollywoof mogul Adam Berkowitz head up efforts to pitch Israeli television to US markets in a Tel Aviv conference sponsored by Israeli government; 'Israeli shows, with their diverse, real-life problems and not-quite beautiful casts provide them with new ideas,' explains Alon Aranya, a writer whose adaptation of Israeli series 'Hostages' was picked up by CBS. 'They like the grit.'

A decade after its television industry inspired the American hits "Homeland" and the Emmy-winning "In Treatment," Israel is stepping up its entertainment exports, with a diplomat and a talent agent acting as its envoys to Hollywood. Though TV format sales account for a sliver of overall Israeli exports—$268 million, or 0.2 percent, in 2016—they open another window into a country that has complained of unsympathetic news coverage in a conflict with the Palestinians. Enter Sam Grundwerg, the Israeli consul-general in Los Angeles, and Adam Berkowitz, co-head of the television department at Creative Artists Agency (CAA). They have been promoting Israel as a wellspring of screen content worth adapting for US audiences or airing abroad in translation.

L to R: US adaptation of Homeland, and Israeli originals Hostages, and Fauda
Homeland and In Treatment have American storylines, but Grundwerg said the fact that they are based on Israeli shows builds relationships with Hollywood that contribute to the country's standing.

Grundwerg (L) with famed basketball player Kareem Abdul Jabbar (R) at a Hollywood event (Photo: Michal Mivtzari)
This week, the duo hosted more than 100 entertainment executives from 20 countries at a Tel Aviv conference sponsored by the government, where Israeli studios and writers vied for buyers. Their documentary and drama ideas were pre-packaged with idiomatic names and polished subtitles in English.

Homeland (Photo: Shotime)
"This is something the prime minister (Benjamin Netanyahu—ed) has a deep appreciation for, as a creature of the media and someone who understands opinion-shaping," Grundwerg said. "(It) gives the biggest bang for the buck in terms of reaching people. These are things that transcend the politics and the tribalism." Israeli political advocacy "doesn't work with me and it doesn't work with others," he added. "This (entertainment outreach) is what creates, for people, an association with Israel at an experiential, emotional level."

Grundwerg estimated 40 percent of his work involves courting Hollywood and the sports and music industries. He said he and Berkowitz took nine studio executives on a five-day tour that included Israel's borders with Syria and Gaza.

Fauda (Photo: Ohad Romano)
Each executive paid for themselves and one of the guests, FX Networks and FX Productions CEO John Landgraft, later lauded Israel in a speech as a "soulful country" that could share his company's motto: "Fearless." Berkowitz, who presided over the conference in a private capacity, said there were currently six Israeli-originated shows being developed by US networks. They include "Fauda," about undercover Israeli commandos pursuing Palestinian gunmen. The show, which Berkowitz represents, was bought by Netflix, with a second season in the pipeline. Its show-runners also garnered new US projects. "Los Angeles tends to be a bubble of comfort. It can be quite arid in terms of original inspiration. The Israeli shows, with their diverse, real-life problems and not-quite beautiful casts provide them with new ideas. They like the grit," said Alon Aranya, a writer-producer who adapted the Israeli suspense series "Hostages" for CBS.

Hostages (Photo: Itiel Zion)
An Israeli show costs as little as $150,000 per episode compared to $2 million to $3 million in the United States, Aranya said. Thrift deepens drama, Berkowitz suggested: "Because Israeli TV is done on such a low budget, the shows are based on the characters." Grundwerg's efforts have been buoyed by Israeli actor Gal Gadot's star turn in the box-office smash "Wonder Woman," and a renewed Hollywood interest in depicting Mossad spy capers like the secret airlift of Ethiopian Jewish immigrants in the 1980s. He wants to bring foreign film and TV productions to Israel, but acknowledges the difficulties posed by having to insure them against war. The Netanyahu government plans to offer tax rebates for such productions and legislation is in the works.