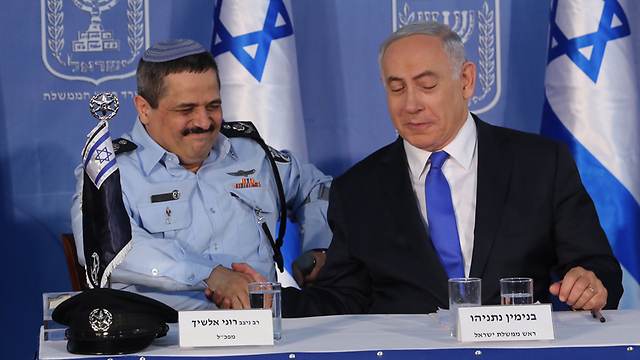 Heating up tensions with police chief, Netanyahu is playing with fire

Op-ed: The prime minister has launched a dangerous, delusional campaign aimed at undermining the public’s trust in two of his personal appointments: Police Commissioner Alsheikh and Attorney General Mandelblit. Regardless of the police’s conclusions and the AG’s decision, the delegitimization is already underway.

Both of them were appointed by Prime Minister Benjamin Netanyahu. Neither of them came from the circles of the Petah Tikva protestors. Neither was ever a leftist or associated with the Left. Neither belongs to the government workers who occasionally try out the “Yes Minister” games. On the contrary, they were political appointments to all intents and purposes. Netanyahu got exactly who he wanted.

So who the hell is the prime minister trying to blame for the investigations against him? He opened his statement Saturday evening with a declaration that, upon taking office, Alsheikh had made the right decision to stop the leaks. He’s right. And Alsheikh isn’t the only one. There’s hardly a single body which hasn’t made decisions of this kind. Benjamin Netanyahu himself has repeatedly made similar decisions. Has it helped? No, it was a wasted effort. There are leaks not only from the government, but even from the prime minister’s bureau. A shower of leaks.

Netanyahu (R) and Alsheikh. The prime minister doesn't want us to believe the two people he appointed himself (Photo: Gil Yohanan)

Most importantly, it’s unclear what the prime minister was so angry about. After all, the way he puts it, there was nothing. Just a Channel 2 report that the investigation is about to be resumed and that Netanyahu will be questioned again. It wasn’t even a leak; it was simply an update on the obvious, nothing more.

But Netanyahu, who was just looking for an excuse to launch a war, eagerly seized the opportunity, trying to explain that the source of the report was a guy called Lior Horev, who was hired as an external advisor to the police. He’s the problem? Is Netanyahu serious? The prime minister has no interest in Horev. He’s not even a pawn and he likely has no clue about the actual investigation, just like Public Security Minister Gilad Erdan has no clue.

So what’s changed? There’s no stain that can be placed on Alsheikh. After all, he was appointed by Netanyahu. So there’s no choice but to stain him through a manipulation on his advisor.

Let’s hope that all the suspicions against Netanyahu are refuted, that he provides an explanation for every allegation and that he’s as clean as a whistle. But one thing is clear: The investigations aren’t being run by Meni Naftali or Eldad Yaniv; they’re being run by two of his personal appointments. And when he tries, directly or indirectly, to attack the media and now some media advisor—he is basically attacking Alsheikh and Mandelblit. And perhaps, even worse, he’s threatening them. He doesn’t want us to believe the two people he appointed himself.

Remember what Sara Netanyahu once said about the post-Bibi era? “This country can burn.” It’s unclear whether Netanyahu has started doing that, but he’s clearly playing with fire.