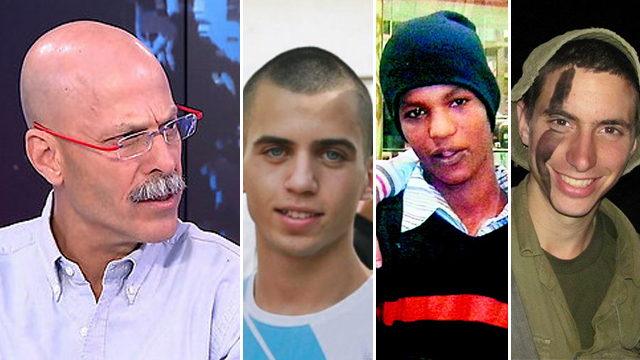 PM announces decision to appoint former Shin Bet official Blum as coordinator for negotiating return of POWs and MIAs; 'I thank the PM for his trust and see this role as a national mission of the highest order,' says Blum, while terror victims NGO warns that 'the appointment is good news for the Hamas,' citing Blum's role in deal that traded over 1,000 terrorists for Gilad Shalit.

Prime Minister Benjamin Netanyahu announced on Saturday his decision to appoint Yaron Blum as the new coordinator for negotiating the return of POWs and MIAs. Blum served for many years in the Shin Bet security service and during his last years in the Shin Bet was a member of the small team that conducted the negotiations and brought about the release of Gilad Shalit.

Prime Minister Netanyahu spoke on Saturday with the familes of Hisham al-Sayed and Abera Mengistu, two of the three Israelis currently held by Hamas after voluntarily crossing the border into Gaza. He also spoke with the families of Staff Sgt. Oron Shaul and Lt. Hadar Goldin, believed to have died in Operation Protecitve Edge in '14 and whose bodies are held by Hamas. Netanyahu reportedly updated all of them of the appointment and emphasized his commitment to the return of their sons home.

No word yet on whether Netanyahu spoke to the family of Jumaa Ibrahim Abu-Ghanima, a Bedouin Israeli citizen and the third Israeli to be held be Hamas.

All three living Israeli captives are rumored to be mentally ill.

Blum holds a BA in Political Science and an MA in International Relations. He is a Fellow at the Institute for the Study of Terrorism of the Interdisciplinary Center Herzliya, serves as an advisor on security and terrorism and serves on the board of directors in several companies.

"I thank the prime minister for his trust," said Blum following the announcment of his appointment. "I see this role he has given me as a national mission of the highest order."

The Goldin family responded to news of Blum's appointment by voicing their hope that he would succeed in returning the their son home. "Yaron Blum has a great responsibility and a simple task—to meet the values ​​of the IDF and the security establishment and to bring Hadar and Oron back to Israel.

"The government now has an unprecedented opportunity to effectively pressure Hamas and enlist the international community to reach the best prisoner exchange agreement in years.

"It took a long and unnecessary period of two months since Lior Lotan resigned until this evening. We have been waiting for three years and three months for Hadar's return, and the hourglass has run out. Netanyahu, through his new emissary, must return the soldiers now, and he must use all the tools and means available to him so as not to miss this opportunity."

Not everyone, however, approved of Blum's appointment. The Almagor Terror Victims Association issued a statement, saying, "The appointment of Yaron Blum as the head of the negotiations team for those missing and captives is good news for the Hamas. The Shalit deal gave them a huge achievement with more than a thousand terrorists and murderers released, exactly six years ago. Many of them have returned to terrorism and some of them now serve as Hamas commanders."

As a result, Almagor announced that "we will also be putting together a team, to monitor him and his team."

Last August, former coordinator Yair Lotan announced he was resigning from his post. After performing the job voluntarily for the past three years, Lotan stated upon his resignation that the position is very demanding both professionally and personally, and that it is therefore appropriate to see to a change among those leading such efforts every few years.

Following Lotan's resignation, the families of Shaul Goldin claimed that they had been abandoned by the system and demanded that a replacement be appointed soon.