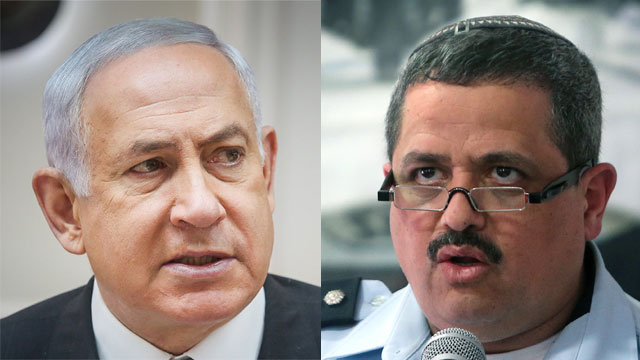 Police in race against time to complete probe against Netanyahu

As Bitan and Amsalem work to rush the recommendation bill through the Knesset, police are trying to conclude investigation into suspicions illicit gifts given to the PM and his family by wealthy donors.

Israel Police investigators are in a race against time to finish their investigation against Prime Minister Benjamin Netanyahu in the next two weeks, before the Recommendations Bill, which would prevent them from publicly presenting their conclusions, is passed into law.

Coalition chairman MK David Bitan and fellow Likud MK David Amsalem have been working to push the contentious bill through the Knesset in an accelerated legislation process.

The bill has already passed a first reading and is expected to be put to a vote for a second and third reading this coming Monday. Once passed, it is expected to go into effect within two weeks.

"We don't have much time," said one official involved in the investigation. "We're aware of what the bill means, and we still have time to work."

Police are investigating suspicions Prime Minister Netanyahu and his family received illicit gifts from wealthy donors, including billionaire Arnon Milchan and billionaire James Packer, with the latter only recently providing his testimony to the police.

The investigators are trying to ascertain whether there is any basis to the suspicions the gifts Milchan and Packer gave Netanyahu were not merely given on account of their friendship, but rather demanded, as well as corroborate Milchan's claim he was required to pay for the gifts, and asked to split the expenses with Packer.

The Knesset's Internal Affairs and Environment Committee held a heated debate on the bill Thursday morning, with members of the opposition leveling harsh criticism against it.

MK Yael Cohen Paran (Zionist Union) attacked MK Amsalem, chairman of the committee and initiator of the bill, for the aggressive promotion of the legislation.

"The conduct here is reminiscent of crime families, your bullying," she said, to which Amsalem replied that she should retract her statement, as it is "very serious."

"I am talking about your conduct. I'm not saying you're the head of a criminal organization," she explained, but Amsalem refused to overlook her remark and threatened to file a complaint against her to the Knesset's Ethics Committee.

MK Yoel Hasson (Zionist Union) then chimed in, backing Paran's assertions. "Members of the coalition factions turn to me and ask that I offset their vote because they do not want to take part in this shame," he said.

"The bill's purpose was to disrupt the investigation process, so this bill is no less than aiding and abetting," Hasson added.

Nachman Shai (Photo: Ohad Zwigenberg)
At the beginning of the discussion, MK Amsalem noted that "the State Attorney's Office closes some 80 percent of the cases in which police made a recommendation to indict on an evidentiary basis." Amsalem then claimed that the main purpose of the bill was to prevent the "trampling the rights of more than ten thousand people. With the bill, the attorney general can receive recommendations in any case he wants, but it is barred from publication because it violates basic rights."

MK Nachman Shai (Zionist Union) appealed to MK Amsalem and said: "In this Knesset term, you've succeeded in breaking all records of harming Israeli democracy. You are destroying the foundations of the State of Israel."

He urged Amsalem to "stop it, cancel, give up, wait, come back in a year, let the current situation get off the agenda, and then go back to it."

MK Leah Fadida (Zionist Union) added that the bill "is a crime sponsored by law... It's a law ordered by the boss. It is reminiscent of dark regimes, a banana republic, the main thing is that they succeed in defending the prime minister."

Opposition was also voiced by the head of the Israel Police's Investigations Division, Eran Kamin: "This is a very bad bill. The bill says that I am required to provide the investigation's summary without its bottom line."