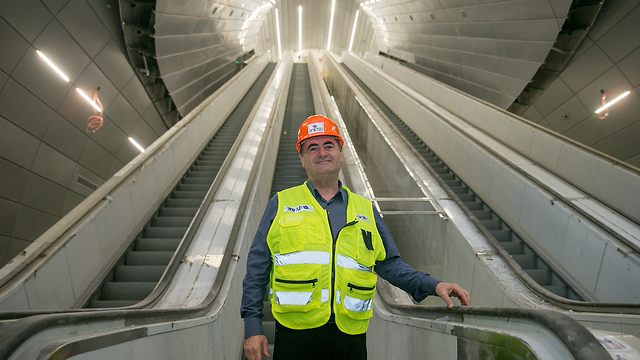 Despite promises by Transportation Minister Yisrael Katz that Tel Aviv-Jerusalem train will begin operations in March, Israel Railways notifies Tel Aviv Stock Exchange that line's opening will be delayed by another half a year as many safety features are still lacking.

Israel Railways notified the Tel Aviv Stock Exchange on Wednesday that the opening of the high-speed train between Tel Aviv and Jerusalem would be delayed by another half a year.

“The company reports that many of the regulatory permits needed to operate the line for commercial passengers, as detailed in the periodic report, have yet to be received.

“Therefore, by the company’s estimate, operations are expected to be postponed for six months, subject to the receipt of all the (necessary) permits,” the company stated.

Transportation Minister Katz at the new Jerusalem railway station (Photo: Ohad Tzvigenberg)
In a press conference in August, 2016, Transportation Minister Yisrael Katz was asked when the train would begin operations and declared: “My word: March of 2018. Every time I take a tour of the worksite, I ask and receive the same reply.” As recently as mid-January, Katz posted on social media: “I promised and I fulfill! By the coming Passover, the high speed train between Tel Aviv and Jerusalem will begin operation (and the journey will) take 28 minutes… The journey will be free, as promised.”

Katz planned on opening the train line the day before Passover with two trains an hour running in each direction and at no cost for the first free months.

(Photo: Ohad Tzvigenberg)
At a meeting Tuesday, Police Commissioner Roni Alsheikh met with railway personnel and representatives of emergency services where they discussed the operation of the train and the necessary security measures and drills needed to operate the line commercially. Alsheikh vetoed the earlier date for safety reasons as the infrastructure is still lacking vital electrical and safety work.

Beginning Passover time, a select number of passengers who sign up in advance will be able to ride on some of the test runs.

Meanwhile, work on the line continues and this week, trains stopped running between Tel Aviv and Haifa due to line electrification work being carried out in the area of Herzliya.

Test runs in the electrified section of the line have already begun, training operators and other train staff is also underway. In the coming weeks, test runs including passengers, and other safety drills will begin, subject to approval by police and safety units.

Gil Yaakov, Director of 15 Minutes, a transit advocacy group, responded to the latest announcement by the railway: “Delaying the opening of the high speed rail line requires the Transportation Ministry to find solutions for passengers who are stuck in traffic on the way to Jerusalem. “The stubbornness of Transit Minister Yisrael Katz in not allotting a public transportation lane on the Jerusalem-Tel Aviv highway is astounding, harms half of the travelers on the highway during rush hour and encourages private car usage,” he continued. “In addition, the ministry should use the coming six months to advance express bus lines to the Jerusalem Central Station from the various city neighborhoods. Travel times for public transit in Jerusalem are long and do not encourage switching (from private cars) to public transportation,” he concluded.