Netanyahu (R) and Filber. The PM never imagined his confidant would decide to tell the truth
Photo: Reuters, Orel Cohen 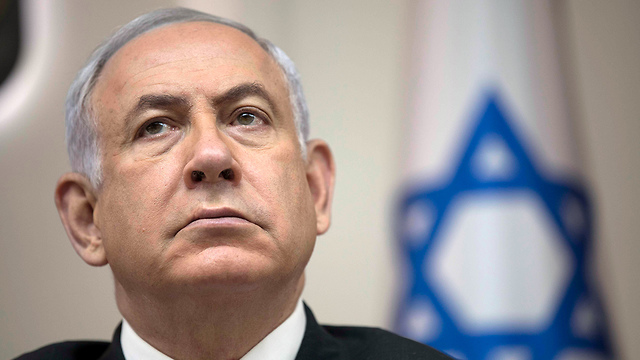 Analysis: The state's witness agreement signed with Communication Ministry Director-General Shlomo Filber has led to a consensus among politicians that the Netanyahu era is coming to its end. Naftali Bennett, who sees himself as the next prime minister, will likely push for elections rather than take part in the formation of an alternative government.

As of last Wednesday, Prime Minister Benjamin Netanyahu is a lame duck. And that's a compliment.

What happened last week led to a consensus in the political system that the Netanyahu era is coming to its end. This is a shocking, dramatic insight. What the police recommendations in Case 1000 and Case 2000 failed to do to the prime minister, leaving him strong and stable, was done by one Shlomo Filber.

Prime Minister Benjamin Netanyahu. State's witness agreement a political earthquake (Photo: EPA)
The Communication Ministry director-general's decision to sign a state's witness agreement has sent the political system into a state of unprecedented chaos. At the moment, no one is able to predict Netanyahu's next political moves: Will he prefer to call quick elections and launch a campaign presenting himself as persecuted prime minister? Will he prefer to play for time as much as possible, while trying to organize a deal in which the criminal cases against him will be closed in exchange for his resignation? The earthquake changes the rules of the game. Up until now, Netanyahu has been setting the agenda. Last week, for the first time, he was taken by surprise. He didn’t foresee the dramatic development in the Judge Gerstl affair, and he definitely never imagined—even in his worst nightmares—that Filber, his confidant, would decide to tell the truth. The different players' understanding that the Netanyahu era is over is has prompted everyone to start playing politics with zero stateliness. From now on, each of them will do what serves them among their voters, making it impossible to run the country for long.

Communications Ministry Director-General Shlomo Filber. Changed the rules of the game (Photo: Motti Kimchi)
Since Netanyahu has no designated substitute, a quick collapse of the prime minister will leave behind a bleeding political system in a state of conflict. There is, of course, a possibility that the information published from Filber's testimony in the coming weeks will rock the political system leading its key players—who are currently keeping silent—to denounce Netanyahu and try to move up the elections against his will. The chance for an alternative government seems very slim. The end of the Netanyahu era will likely be followed by elections, primarily because Bayit Yehudi leader Naftali Bennett, who is eying the premiership, will be unwilling to crown a new king without elections. If an alternative government is established, which seems highly unlikely, it would have to be formed by a member of the Likud faction. The leading players who may try to lead such a move are Transportation Minister Yisrael Katz or Knesset Speaker Yuli Edelstein.

Bayit Yehudi leader Naftali Bennett. Sees himself as Netanyahu's successor (Photo: Ohad Zwigenberg)
Again, all these analyses should be taken with a grain of salt. First of all, the decisions can still be made by only one man, Benjamin Netanyahu. Second, the investigations are developing so fast that they could lead to other unexpected surprises. For example, a dramatic development in the Judge Gerstl affair. For now, media advisor Nir Hefetz is denying that he offered Judge Hila Gerstl the position of attorney general, through strategic advisor Eli Kamir, in exchange for dropping the case against the prime minister's wife, Sara Netanyahu. On the other hand, Kamir reportedly testified that he had been "shocked" by Hefetz's proposal, and Supreme Court Chief Justice testified that Judge Gerstl was "shocked" by the affair too. Hefetz could become a state's witness himself and deepen Netanyahu's legal troubles even more. Filber's testimony could get both Hefetz and Kamir in further trouble too: Hefetz was allegedly Netanyahu's contact to the Walla! website and Kamir received unexplained sums of money from Bezeq.