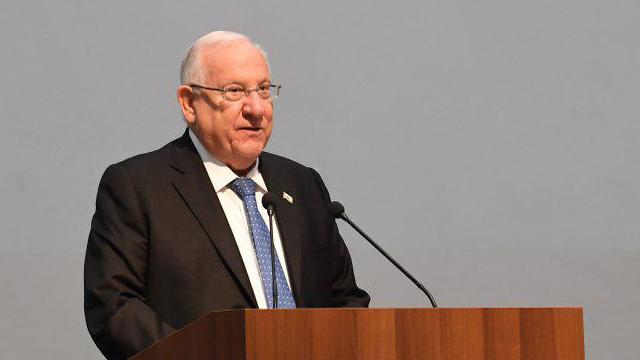 Rivlin calls for 'dialogue, not coercion' over draft bill

Speaking on crisis surrounding Haredi draft law, President Rivlin says matter should be resolved through dialogue, not coercion, and that if it isn't it will 'continue destabilizing political system'; Yesh Atid Chairman Lapid participates in rally protesting draft law, flanked by man in Haredi garb who turns out to be costumed party activist; Yesh Atid maintains costume was his 'own initiative.'

President Reuven Rivlin commented Sunday on the possibility of elections being moved up due to crisis surrounding the IDF conscription law, and said that, "If we don't resolve our differences through dialogue, they will continue destabilizing the political system and increasing tensions between sectors."

Speaking at the Israel Press Council's annual conference in Lod, President Rivlin added, "The conscription issue cannot be resolved with coercion, only with agreement." "This is not a disagreement between those who hate the IDF on the one hand and those who hate the Torah on the other," Rivlin said, "but between Israelis—all of whom appreciate both the army and the Torah and those studying it."

President Rivlin said crisis surrounding draft bill should be resolved through dialogue, not coercion (Photo: Kobi Gideon/GPO)
"Growing discourse in the past 24 hours surrounding moving up elections due to the draft bill touches on a very sensitive spot for Israeli society—sensitive to those serving in the IDF and sensitive to the Haredi public. This isn't the first government to be destabilized by the combustible issue," Rivlin concluded. Political sources surmised Saturday night that Haredi insistence on approving a law providing draft exemptions to Haredim before voting on the state's 2019 budget will lead to the Knesset's dissolution. With that eventuality in mind, Haredi party officials are set to reconvene with their Councils of Torah Sages, whose members have instructed them to not support the budget until a favorable law is approved. Haredi MKs, then, will endeavor to make it clear to their leaders that insisting on the bill's current promulgation and on voting on it in the timetable set, will invariably lead to new elections.

PM Netanyahu (R) spoke about the draft bill crisis before taking off to the US with his wife (Photo: Haim Zach/GPO)
Prime Minister Benjamin Netanyahu, for his part, said before lifting off for a visit to the United states that there's no reason for the crisis around the draft bill to lead to early elections. "There is no need for (to go to early elections) and if there is goodwill it won't happen," Netanyahu said while standing with his wife Sara before ascending the plane. "There's goodwill on my part and I hope that there is also among our other partners."

'Media must not be silenced'

On incessant criticism the media faces, Rivlin said, "The media or the discourse it engenders must not be silenced, even when it's unpleasant—whether to the Left or to the Right.

"It's important to remember the press and the media are a fundamental institution in democracy and it is precisely for that reason that journalists are expected to be supermen—honest, professional, loyal and committed.

The president sympathized with journalists, saying it was not a simple time to be one (Photo: Lihy Krupnik)
"This isn't a simple time to belong to the guild of journalists in the world. Journalists and newsrooms are under attack. They're accused of creating 'fake news', of biased coverage, of lack of diversity. No WhatsApp group and no Telegram channel can change a journalist's duty and commitment to their readers. "This commitment at the heart of the profession has remained unchanged since the days (father of revisionist Zionism Ze'ev) Jabotinsky was a journalist—the commitment to put forth a fact-based story. The commitment to ascertain all of the facts. The commitment to provide as complete a picture as possible and to shine a light on dark corners."

Yesh Atid Chairman Yair Lapid arrived to the Tel Aviv Savidor Central railway station Sunday morning to show support for IDF soldiers and to protest the draft bill Haredi parties were seeking to pass through Knesset. A man dressed in Haredi garb and carrying a sign saying "He who has faith does not draft dodge" stood prominently by Lapid when he made prepared remarks.

After the protest, it came to light the man was a Yesh Atid activist named Dave Mandelshtam, who was not Haredi, in costume. Mandelshtam published a photo from the rally on his Facebook page, and his amused friends commented, "You should have worn a hat" and "Maybe you should focus on songwriting."

Lapid (L) and the Yesh Atid activist in Haredi costume (Photo: Motti Kimchi)
Yesh Atid commented on the incident, saying, "A Yesh Atid activist indeed dressed up as a Haredi on his own initiative and carried a legitimate sign. We'd take anyone saying that bothers them a little more seriously if they had first denounced the hanging effigies in Mea Shearim, attacks on Haredi soldiers or burning Lapid's photos in Lag B'Omer bonfires." Lapid himself said at the protest, "After the Supermarket Law comes the draft dodging law. This law is a spit in the face to IDF soldiers, the State of Israel and the Torah. "Nowhere in the Torah does it say that you can send others to die for you. Nowhere in the Torah does it say you can dodge Magen David Adom national service or helping the elderly or the disabled. "The Haredim are merely taking advantage of Netanyahu's weakness due to investigations to steamroll the secular, religious and traditional publics in Israel. This law is an insult to all IDF soldiers. Stop the draft dodging law, return to equal sharing of the burden."